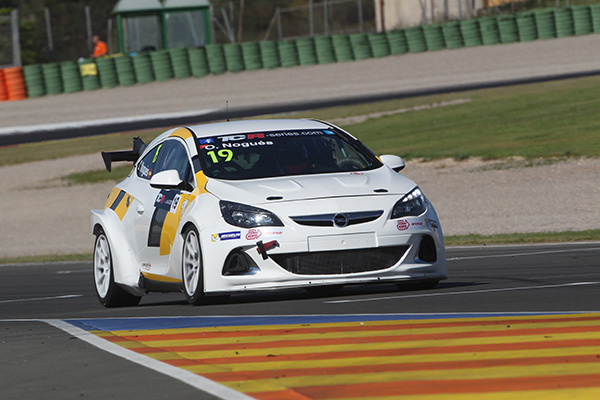 There were smiles and cheers in the Campos Racing box at the end of Qualifying, as for the first time one of the Opel Astra OPC cars made it to Q2, thanks to Óscar Nogués, who later took a superb eighth position in the final qualifying session.
The result and consistently-improved pace throughout the sessions at Valencia, proved the significant progress made by the German cars after a difficult season debut in Asia.
“We worked a lot since the cars came back from Shanghai”, explained Campos Racing team manager Fernando Monje, “There were a number of electronics problems to solve to get the engine working properly. Now that those seem to have been solved, we can start developing the car set-up, which we only achieved here in Valencia, after a shake-down in Barcelona.”
Despite being a last-minute addition to the team, Óscar Nogués was able to contribute all his experience and speed to Campos Racing. “We have been bringing down lap times since the start of the weekend”, said the 36-years-old Catalan driver, “despite still having some issues from time to time, like in Q1, when an oil spill provoked a huge smoke cloud in the pits. We feared the engine had blown but luckily it was a very small thing. I was fortunate to make it to Q2, by only 25 thousandths of a second, and in the final 10-minute session, everything went well and I could put on a time that leaves us 8 tenths from the pole.”
This was for sure an unexpected but much-welcomed result, and the perfect boost for the morale of the entire squad, which is based a few kilometres from the circuit. Present in the boxes, team owner Adrián Campos was attending a TCR event for the first time: “I am very happy”, admitted the former F.1 driver, “and I do believe a lot in the TCR concept, which seems particularly suited for the current times. This is why we wanted to be present since the very beginning, although the car clearly needed more time. Opel Motorsport has great plans for the future and we are happy to be associated with them.”