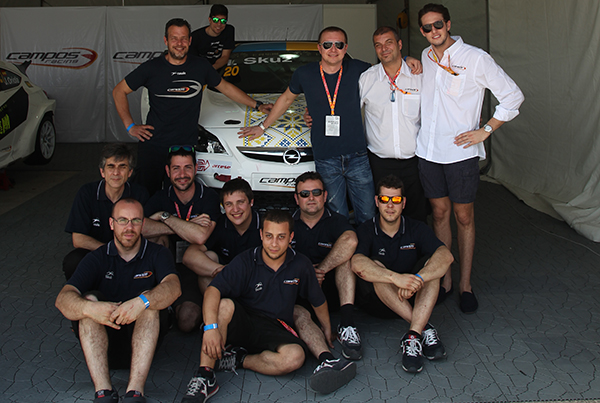 Campos Racing won its own battle in Malaysia

The inaugural event of the TCR International Series has had many heroes, but there is no doubt that among them there is a bunch of guys who deserve special praise: the crew of Campos Racing.
The mechanics and technicians of the Spanish squad have worked round the clock to solve the technical problems that plagued the two Opel Astra OPC cars of Igor Skuz and Jordi Oriola and were able to get Skuz on the grid for Race 2.
It was a race against time to get the cars ready for the opening event. They arrived in Malaysia without the necessary development and testing and soon encountered power problems due to the extreme heat that triggered the activation of the electronic auto-protection system.
Eventually the team had to work out a creative solution to the problem, by fitting a larger radiator built on the spot from an after-market spare found in a local retail shop. The heavier piece required stronger brackets, which were crafted from a … fire extinguisher! Campos Racing staff worked long hours and until 5am on Sunday morning to allow Skuz’s car to start Race 2.

Achieving that obviously had the taste of success. “We came a long way to Malaysia and this first race,” commented team manager Rubén Espín, “and there was no way we wouldn’t try the impossible to be at the start of at least one race with at least one car. We won that challenge and now we will work to be ready for Shanghai. We know that we still have a lot of work ahead with the cars, as they are brand new, but we are ready for the challenge.”