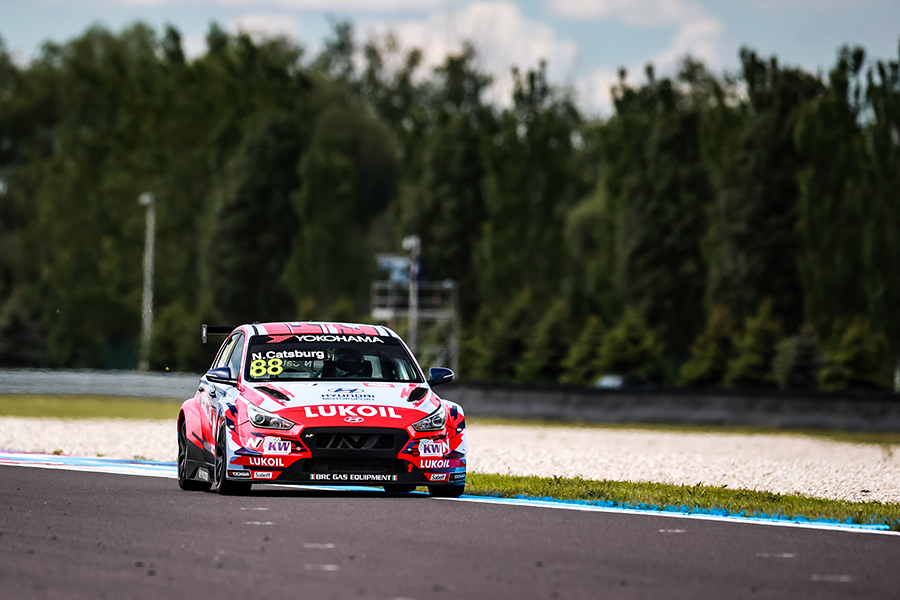 Catsburg and Michelisz lock out front row for Race 1

Hyundai fellow drivers Nicky Catsburg and Norbert Michelisz locked out the front row for WTCR Race 1 at the Slovakiaring.
In a session that started under a threat of rain and was disturbed by some drops in the dying moments, Hyundai, Alfa Romeo and CUPRA cars equally shared the first six spots of the timesheet.
Catsburg and Michelisz were in a league of their own. The Hungarian posted a provisional fastest time of 2:09.873 on his first lap out and despite he was able to improve to 2:09.527 by the end of the session, he had to settle in second position behind Catsburg’s 2:09.498.
The rest of the field remained half-a-second behind, with Ma Qing Hua’s Alfa Romeo Giulietta in third position (2:09.907) followed by the CUPRA cars of Daniel Haglöf (2:10.108) and Tom Coronel (2:10.154), while Kevin Ceccon’s Giulietta rounded off the top six (2:10.339).
Jean-Karl Vernay was the fastest of the Audi drivers in seventh just ahead of Esteban Guerrieri in the best Honda car. Mehdi Bennani was the only Volkswagen driver who proved to be competitive as he ranked 10th, nine tenths off the pole, while current points leader Néstor Girolami will start from the 11th position and Gabriele Tarquini qualified 13th. However the Italian will start 18th due to a five-place grid penalty he was given after a collision with Guerrieri in Race 2 at the Hungaroring.
The Lynk&Co cars struggled and Yvan Muller was the best of the four drivers in 18th position, 1.4 seconds behind Catsburg.
WTCR drivers will return into action at 16:40 for the Qualifying session that will determine the grids for Races 2 and 3.
Race 1 will start at Sunday at 10:45 local time.