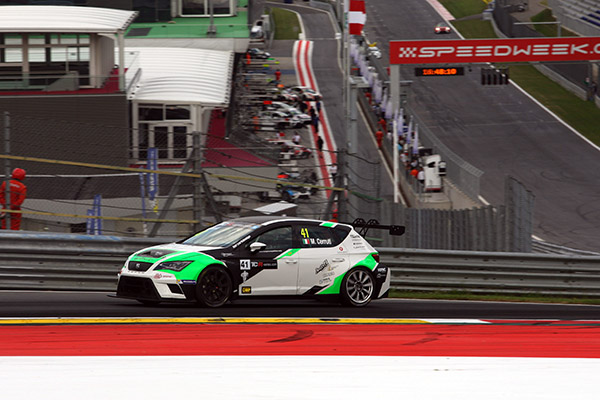 It was a day of surprises for many at the Red Bull Ring, as temperature rose significantly throughout the day while grip conditions kept changing after different series left rubber of different compound on the tarmac.
This explains why performances of some contenders changed drastically between Free Practice 2 and Qualifying.
While some, like the Honda Civic cars of Gianni Morbidelli and Kevin Gleason experienced a dramatic improvement, securing the first row on the grid for Race 1, others that had shone in Practice, like Liqui Moly Team Engstler’s new Volkswagen Golf TCR cars, suddenly found themselves in a completely different situation. “We need to analyze carefully the data, because the performance was simply not the same”, admitted Mikhail Grachev. His teammate Pol Rosell echioed: “All of a sudden, we had terrible oversteer and the car became very difficult to drive.”

Michela Cerruti, who is making her TCR debut this weekend, also felt the same: “It seemed a completely different track, which made my life even more difficult, as I was discovering the car”. The Italian lady driver, who can claim the title of “Ringmeisterin” since her win last weekend in a VLN round at Nürburgring’s Nordschleife, acknowledged: “It’s since 2009 that I don’t race on a front-wheel drive car and it was tough at the beginning this morning, especially in such a competitive series as this, but by the end of FP2, I felt much more comfortable. Then, in Q1, I found conditions had changed completely. On top, I also did a mistake following my teammate Comini. It will be better tomorrow in the races, as it is often the case for me.”