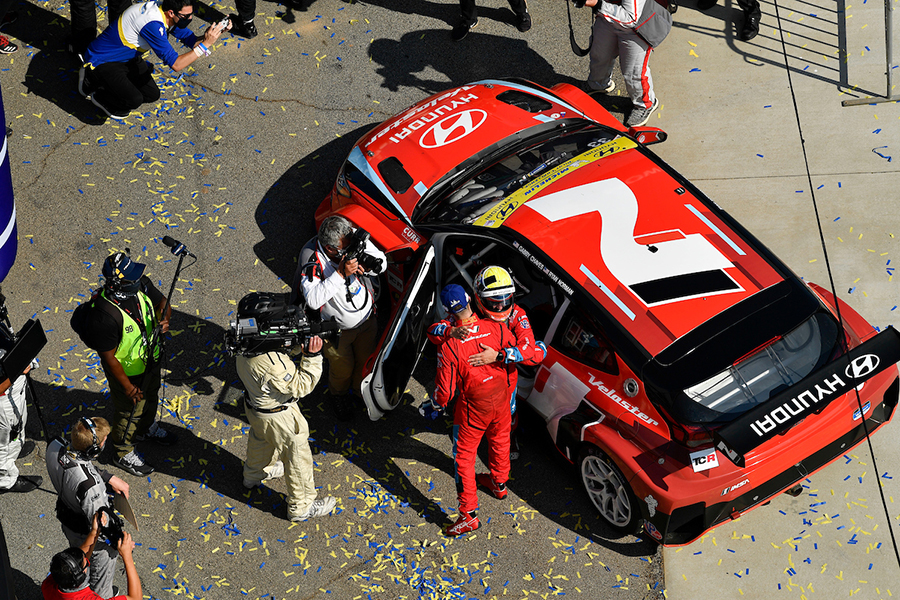 Gabby Chaves made the most of the final restart in the 4-hour race at Road Atlanta, the fifth round of the IMSA Michelin Pilot Challenge. Chaves shot from third to first in the TCR class after the restart with 56 minutes left, then went on to claim the second victory of the season for him and codriver Ryan Norman.
Chaves passed Matt Pombo and Parker Chase, then carefully saved fuel to make it to the finish line first in the #33 Bryan Herta Autosport Hyundai Veloster N, scoring the fourth consecutive win for the team and the Korean manufacturer.
"It seemed like our teammates (Chase/Brockman) might have been on a different strategy, so I was just trying to use them as pace and save extra fuel," Chaves said. "Then it looked like they changed strategies to fuel save, which was holding me up quite a bit, so I went for the overtake, got it done and just tried to drive my race. I knew I could save fuel a little bit better than them, it seemed. I knew I had a better pace and could probably hit the (fuel) number to get home."
After Chaves finished off the winning run, he credited Norman for a starting stint that put their car near the front. "During my run I was just trying to get through the start nice and cleanly," Norman said. "The Alfa had really good pace on the straightaways from us, so I knew at some point I was going to have to get around him. Then he ended up having an issue later on in the race. It was just how traffic worked out with the GS cars on the restarts. I was just able to kind of pinch my way in between all the cars, so that worked out well for us."
Chase finished second in the #29 BHA Hyundai shared with Spencer Brockman; Pombo crossed the line third in the #73 LA Honda World Racing Honda Civic shared with Mike LaMarra.
The KMW Motorsport Alfa Romeo Giulietta of Tim Lewis and Roy Block led the race for the first two hours, but then was delayed by a technical issue and eventually was classified sixth, five laps behind the winners.
With this result, Chaves-Norman took the lead in the standings ahead of their teammates Mark Wilkins-Harry Gottsacker and Michael Lewis-Mason Filippi.
The series will resume at Mid-Ohio on 25/27 September.