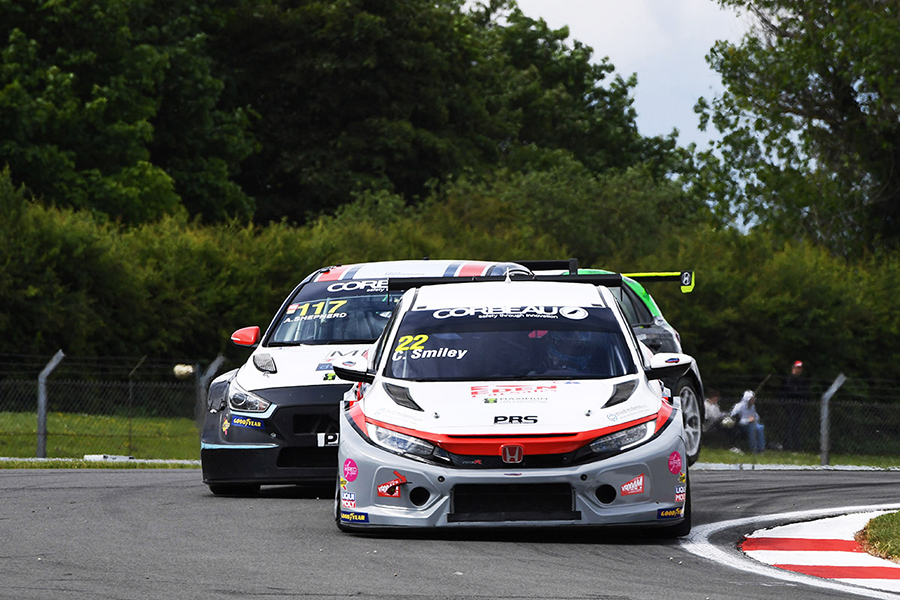 Smiley joins Smith on top of the TCR UK standings

Adam Shepherd took his maiden TCR UK win in Donington Park’s Monday raceday, becoming the ninth winner in the season, while Jac Constable inherited victory in Race 2 after Andy Wilmot was excluded. Chris Smiley jumped to the top of the standings, thanks to a third place in Race 1 and despite he was sent off at the start of Race 2, while Chris Smith slipped down to second, on equal points, as he had to drop 36 points – his two worst scores. With 88 points on offer in the final weekend, at Snetterton on October 22/23, five other drivers are still in contention: Shepherd, Bruce Winfield, Lewis Kent, Alex Ley and Constable who have gaps of 26, 30, 60, 68 and 78 points from the leader.

Race 1 – Shepherd had beaten Smiley and Max Hart to the pole; the points leader Smith had been eighth fastest but was dropped to 11th by a penalty from the previous round, while Bradley Kent (9th fastest) was sent to the back after an engine change. Shepherd led at the start from Hart, Smiley, Winfield and Ley, but the safety car was deployed at the end of the first lap to recover Scott Sumpton’s Hyundai from the gravel. Racing resumed in lap 6, and soon a close fight for P7 developed between Lewis Kent, Smith and Bradley Kent who had recovered from P24 on the grid but made a mistake and dropped back again. In lap 9, Winfield passed Smiley for P3, with the latter put under pressure from Constable and Ley. With Shepherd leading by more than one second over Hart, focus shifted on the battle for third, with Winfield chased by Smiley and Constable. With two minutes to go, Hart pitted with a technical issue and retired for the fifth consecutive race. Shepherd claimed his maiden win from Winfield, Smiley, Constable and Ley, with Lewis Kent and Smith finishing sixth and seventh.

Race 2 – Wilmot and Matthew Wilson shared the front row of the reversed grid, with title contenders Smith and Smiley in P4 and P8 respectively. Wilmot led at the start from Smith who jumped into second and Lewis Kent. As the field went into T1, Jamie Tonks and Shepherd made contact, and Shepherd hit Smiley who retired. In lap 2, Constable passed Lewis Kent for third and then Smith for second. In lap 7, Hart retired once again with a broken suspension, Lewis Kent too limped to the pits, while Darelle Wilson hit Matthew Wilson who crashed into the barriers. Up front, Wilmot built a 2-second lead, while Constable was chased by Smith and Bradley Kent. Kent overtook Smith for third in lap 12, with Smith trying to defend himself from Shepherd who had passed Ley for fifth. In lap 14, Shepherd took to the inside of Smith, Ley hit the back of Shepherd’s car that was pushed against Smith’s who went off and rejoined in seventh place, while Winfield passed Ley for fifth. In lap 18, Shepherd passed Kent to finish third behind Wilmot and Constable, while Smith dropped from seventh to ninth as he was passed by George Heler and Tonks during the last lap.

After the race, Wilmot was excluded for an overboost infringement and so Constable inherited the victory.