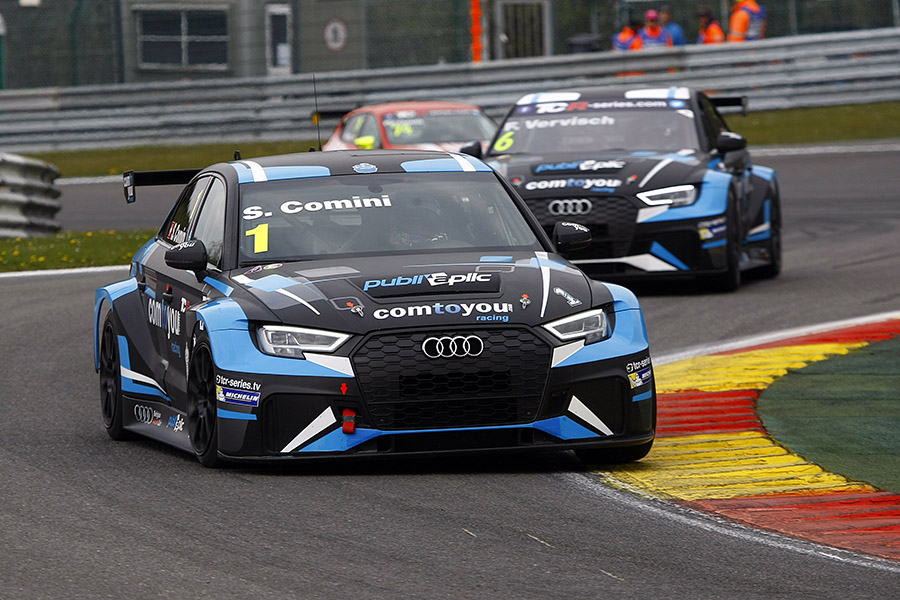 Comini and Vervisch make an Audi 1-2 in Qualifying

The two Audi RS3 LMS cars of Comtoyou Racing will start Race 1 from the first row, as Stefano Comini and Fred Vervisch were the fastest in an exciting qualifying session and gave the German car its first pole position in the International Series. The reigning double champion and the debuting local hero emerged as the winners from a close fight with Benjamin Lessennes, a brilliant and close third in the Boutsen Ginion Honda Civic. The Leopard Racing Volkswagen Golf GTI cars of Jean-Karl Verney and former World Champion Rob Huff completed the top 5.
The only two incidents in the Qualifying session involved Belgian drivers, with both Guillaume Mondron (Delahaye Racing Team SEAT León) and Maxime Potty (Mazuin Racing VW Golf) hitting the barriers, the first in Q1 and the second in Q2. This did not prevent Potty to take P10, which grants him the theoretical pole for Race 2, if the car is repaired.
The first race will start this afternoon at 17:25 local time (live streaming at www.tcr-series.comand www.tcr-series.tv).

Qualifying 1: Ficza on top of the field
Ferenc Ficza confirmed his speed qualities by taking fastest time in a hardly-fought Q1 session. The young Hungarian, now at the wheel of a ZengőMotorsport SEAT León, stopped the watches in 2:31.205, beating Comini (2:31.344) by a tenth and a half. Tom Coronel (Boutsen Ginion Honda) took third, despite a scary moment at Les Combes, ahead of Huff, Lessennes and Verney.
Again, the TCR Benelux drivers did well, with only Guillaume Mondron out of the top 12; the young Belgian, who had led the session at the beginning, lost the car in the chicane after Les Combes, crashing into the barrier.
The list of drivers not making it to Q2 included some big names, like Morbidelli, Nash, Colciago, Borković and Valente.
Even longer was the list of drivers who had at least one lap disallowed for not respecting track limits; Homola, Corthals, Ficza, Kajaia, Morbidelli, Valente, E. Mondron, Paulsen, Ende, Vernay and Oriola.

Qualifying 2: Comini nails down the pole
Comini took the pole in Q2, after a good fight with local heroes Vervisch and Lessennes. The Swiss was able to beat his new teammate by a mere 0.067 seconds, while Lessennes was left a further 0.244 seconds adrift.
Potty had a scary moment as he lost his Golf in the Eau Rouge, hitting the barriers on the right side. Despite that, the young Belgian kept P10 and the pole for Race 2.
Two drivers concluded the session without clocking a valid lap time: Davit Kajaia (GE-Force Alfa Romeo Giulietta) had both his laps disallowed for not respecting the track limits, while Ficza was sidelined by a broken driveshaft.