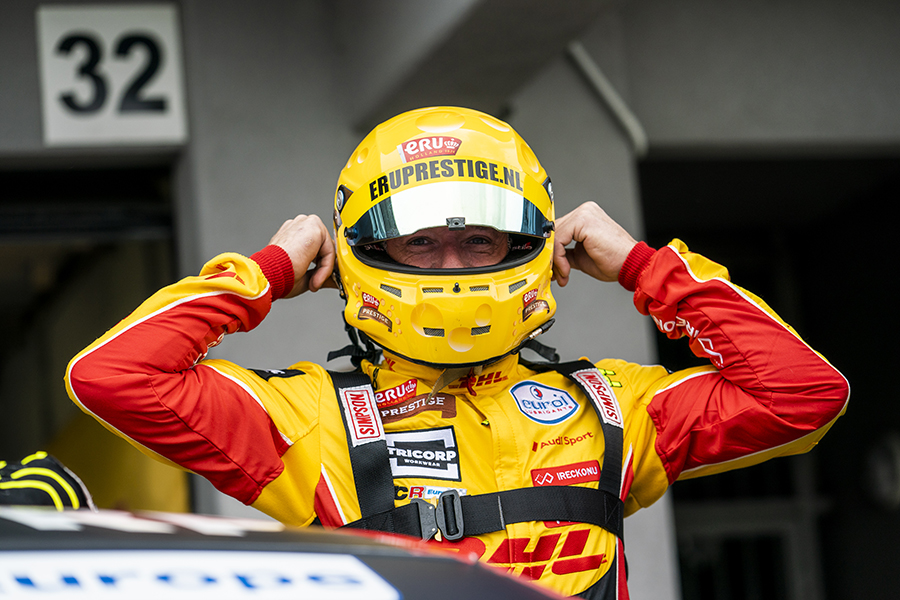 Coronel secures a dramatic pole position at the Slovakia Ring

Tom Coronel and his Comtoyou Racing Audi RS 3 LMS, will start the first race of the 2021 TCR Europe season from pole position after two dramatic Qualifying sessions at the Slovakia Ring. Alongside Coronel on the front row will be the Volcano Motorsport CUPRA Leon Competición of Mikel Azcona, the 2018 TCR Europe champion.
In Q1, while most drivers elected to do an installation lap and then pit for a tyre change, Coronel chose to stay out and completed two quick laps. His first competitive time was a 2:11.902 and he immediately bettered that time with a 2:11.219 on his next lap. His tactics seemed to have been correct, as the session was red-flagged with a little over eleven minutes remaining when Teddy Clairet’s Peugeot 308 went into the gravel at Turn 6. When the session resumed, there was a scramble to beat Coronel’s time, with both Coronel and Mat’o Homola electing to remain in the pits to see what the others would do.
First, Coronel’s teammate Dušan Borkovič went quickest with a time of 2:10.758, but the Serbian driver was beaten almost immediately by Azcona with a 2:10.510. Franco Girolami then posted a 2:11.681 to go P5, with Nicolas Baert (2:11.479) and then Dániel Nagy (2:11.378) securing their places in Q2. Towards the end of the session, Coronel went back out and re-took P2 with a time of 2:10.594. On a thrilling final lap, Felice Jelmini made the top-ten kicking his teammate Niels Langeveld out of Q2 by 0.079 of a second.
At the start of Q2, Homola’s Hyundai remained in the pits with its bonnet up, with a dejected Homola soon climbing out of the car that suffered from a fluid leak. Coronel, too, remained in the pits, but the Audi driver was playing a waiting game to see what his rivals would do. The answer was quick to emerge; Borkovič posted a 2:10.720 on his first flying lap, with his team-mate Baert going P2 with a 2:10.960. On the next lap, Azcona posted a 2:10.664, with Nagy (2:10.836) going P3. Baert then briefly took provisional pole position with a lap of 2:10.570 before Coronel snatched it back on his first competitive lap of the session with a 2:10.344. Again, there was a dramatic end to the session with Azcona making a last-gasp attempt to retake P1, but it wasn’t to be and so the Spaniard would have to settle for second on the grid alongside Coronel for Race 1 with a time of 2:10.502. Thanks to the reversed grid, Mehdi Bennani is on provisional pole position for Race 2 in the Sébastien Loeb Racing Hyundai Elantra N.
The first race will be streamed live today at www.tcr-series.com; 15:15 local time (CEST).