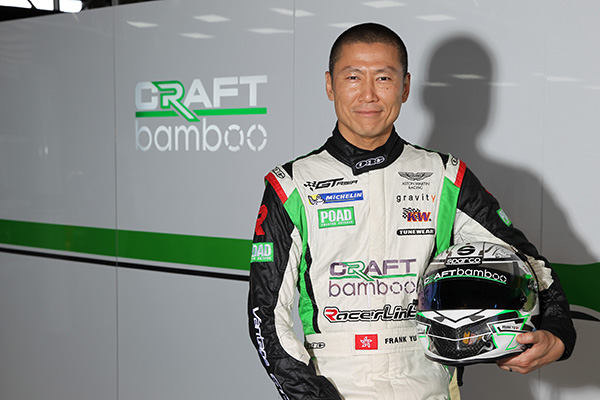 Craft-Bamboo Racing announces that Hong Kong driver, Frank Yu, will be contesting the new TCR International Series season opener in a fourth “wildcard” entry for the team at the Sepang International Circuit. Yu, a regular driver for Craft-Bamboo Racing in the GT Asia Series, will race in a SEAT León Racer car.
A celebrated architect, Yu is also a talented multi-discipline driver, racing in GT cars, sports prototypes and endurance events over the past 8 seasons. His biggest successes include winning the Malaysian Super Series Championship title in 2012 and taking third overall at the 2013 Dubai 24 hours.

Frank Yu declared: “I am very excited to join the first round of the TCR international series. I have been extremely interested in this series since it was first revealed and I am glad that it is finally here. It’s my first time driving a front-wheel drive turbo touring car and with my limited track time I know that this will be a challenge, but I am looking to gain as much experience as possible. I know I will be going up against some strong competition but I am very happy to be a part of the inaugural race in Sepang.”

Richard Coleman, CEO of Craft-Bamboo Racing, said:"We are excited to have four cars on the grid for the inaugural race at Sepang. We are committed to three cars for the full year, but we will likely see Frank make appearances throughout the season."