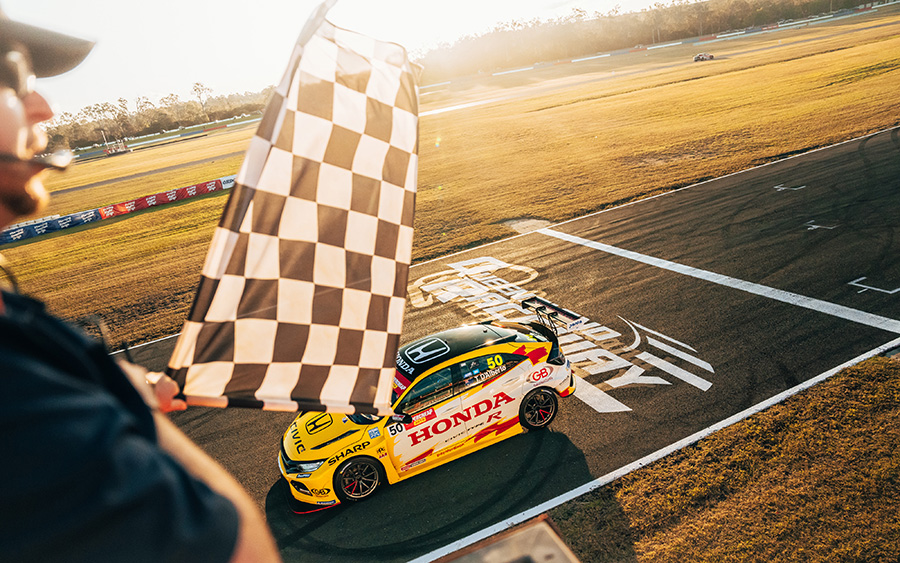 Tony D’Alberto and Jay Hanson were the dominant forces in TCR Australia’s event at Queensland Raceway. After they took one win apiece in the first two races of the weekend, they delivered a thrilling fight for victory in Race 3. Eventually, D’Alberto took his second win and stretched his leadership in the standings to 58 points over Jordan Cox, while Hanson lies in third position, two further points adrift.

Race 1 – D’Alberto had the pole and led from Zac Soutar, Will Brown and Hanson. In a chaotic first lap, Bailey Sweeny went wide after clashing with Aaron Cameron, Brown drove on the grass and dropped to 14th, Michael Caruso was hit by Josh Buchan and rejoined at the back. The Honda cars of D’Alberto and Soutar pulled away, with Hanson trying to stay in touch. In Lap 7, the safety car was deployed after Ben Bargwanna and Nathan Morcom collided and stopped in the gravel. When racing resumed, in lap 13, Hanson, Cameron and Luke King were fighting for P3; Sweeny then passed King for sixth. Up front, D’Alberto and Soutar finished 1-2 with Hanson a close third; Cameron beat Sweeny for P4 but was dropped to 13th by a 15-second penalty for the incident with Sweeny.

Race 2 – Caruso was on pole, while Lachlan Mineef started from the pitlane instead of P2. Caruso got away well and led from Brown and Michael Clemente; the latter went wide at T3 and dropped to sixth. While the leading pair pulled away, there was a fight for P3 between Cox, King and Hanson. In lap 5, Dylan O’Keeffe’s Peugeot retired with a technical issue. In lap 8, Hanson passed Cox for third and the latter lost fourth to King soon afterwards. In lap 11, Cameron pitted, his Peugeot suffering from a turbo failure. Caruso built a two-second lead and Brown defended the second place from Hanson, but with three laps to go Caruso’s Alfa Romeo pulled over in a cloud of white smoke. Hanson overtook Brown to claim his fourth win of the season, while King completed the podium ahead of Cox and D’Alberto.

Race 3 – From P2 on the grid, D’Alberto started better than pole sitter Hanson; behind them Soutar and Cox moved into third and fourth, while Brown passed King for fifth after they made contact. In lap 2, Brown overtook Cox for fourth, while King and Sweeny swapped paints in the battle for P6, which helped Buchan to climb to P7. D’Alberto was closely chased by Hanson and Soutar; in lap 13, Soutar overtook Hanson for second. Behind the four leaders, Sweeny advanced to sixth and then passed Cox for fifth in lap 15. D’Alberto held on to the lead until the end, beating Soutar by four tenths, while Hanson was third ahead of Brown.

Caruso missed to join the race, despite the team worked frantically to change his engine.

The next event will be at Sandown Park, September 16/18.