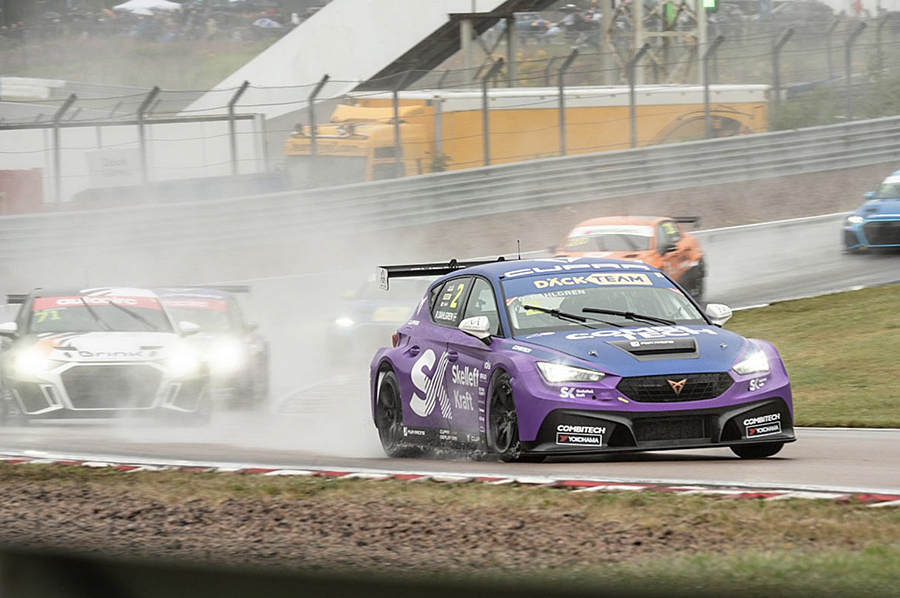 Dahlgren takes a hat-trick in TCR Scandinavia at Knutstorp

Saturday itself was wet throughout. In the first race, Dahlgren made a good start, while Bäckman was passed by his teammate Oliver Söderström and dropped to third. Mattias Andersson and his MA:GP Lynk & Co made steady progress, passing Axel Bengstton for fifth, before making a move on Hugo Nerman, but they both went wide and that allowed Bengtsson back through. Andersson dispatched Bengtsson at the next corner, before passing Bäckman for the final place on the podium, while Dahlgren won ahead of Söderström by three seconds.

Dahlgren again started from pole for Race 2, while Bäckman made a bad start falling behind Bengtsson and Tobias Brink. Nerman was pushed wide by Söderström while they battled for fifth. Up ahead, Bengtsson was fighting to hold back Brink, while Dahlgren pulled away. Brink eventually got past Bengtsson, but by now Dahlgren was far up the road. Nerman stopped with his car overheating from all the debris in his grille, which caused the safety car to be deployed. The race was quickly restarted, and Dahlgren went on to win ahead of Brink and Bengtsson.

The top eight were reversed for the final race, which put Isac Aronsson on pole ahead of Andersson. Aronsson made a good start, while Andersson lost ground, with Bäckman up to second while Söderström stalled from third and dropped back. By the end of lap two, Dahlgren was up to third, passing Marius Solberg Hansen’s Volkswagen Golf, and he quickly closed on the leading pair. Bäckman was clearly frustrated behind Aronsson and made his move for the lead, Dahlgren also passed Aronsson for second. Aronsson was caught by Andersson; the two made contact, with Aronsson retiring from the resulting damage. On lap 11, race leader Bäckman made a mistake and dropped to fourth behind Dahlgren, Andersson and Hansen, though he was able to recover to third on the penultimate lap. Andersson was given a five-second penalty for the incident with Aronsson, which promoted Bäckman to second and Solberg Hansen to third, his first podium finish.

Dahlgren leads the drivers’ championship by 32 points over Söderström, heading to the next round at Karlskoga’s Gelleråsen Arena on August 19/20.