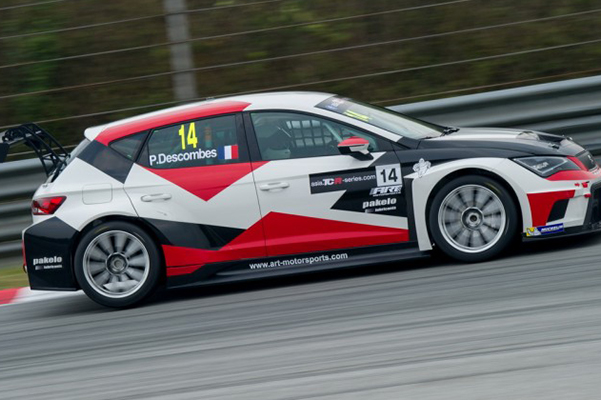 Descombes sets the pace in TCR Asia at Sepang

ART Motorsport’s Philippe Descombes and his SEAT León set the pace today at Sepang International Circuit, in Malaysia, where the TCR Asia Series got underway with two Practice sessions.
The Frenchman posted the fastest lap in both sessions: 2:20.619 and 2:21.333 respectively.
Hong Kong’s Andy Yan – a double champion in the China Touring Car Championship – impressed during the second Practice as he drove his FRD Racing Team Ford Focus to clock the day’s second fastest lap of 2:22.271. For some time Yan was just two tenths off Descombes’ provisional fastest time.
Local driver Kenny Lee (Wing Hin Motorsports SEAT) and Kenneth Lau (Prince Racing Honda Civic) set the third and fastest laps of 2:22.531 and 2:22.940 respectively.
A total of 11 TCR cars entered in the event, but two of them missed today’s Practice: Descombes’ team-mate Rodolfo Ávila was sidelined by a minor health issue, but is expected to join the field on Saturday; customs issues slowed the delivery of the Mountune-built engine, which was going to power Kenneth Ma’s FRD-built Focus. This means that Ma will only join the field for the next race meeting at Singapore.
Track action will resume tomorrow with two Qualifying sessions and the first of the event’s three 10-lap races that will be streamed live from 13.45 local time (07.45 CET) via the official website: www.asia.tcr-series.com.