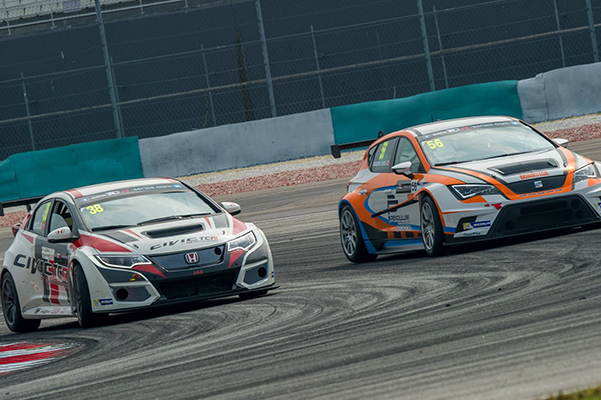 The ART Motorsport-run SEAT León cars continued their domination in the opening event of the TCR Asia Series at Sepang.
Although Rodolfo Ávila, the winner of yesterday’s Race 1, was replaced by Liu Lic Ka due to his commitment to the Porsche Cup, ART’s second driver Philippe Descombes won both today’s races and emerged as the first leader of the championship.

RACE 2 – Descombes sprinted at the start from pole position, while Choi, Lau, Kwong and Yan had a close battle for second. However, Yan’s Ford was plagued by electrical problems once again and was forced to pay frequent visits to the pits throughout the race.
As Descombes increased his leading margin, Lau, Choi and Kwong continued to fight over the second position until halfway, when Lau was black-flagged for a grid infringement. In fact the Prince Racing driver had recovered his third position on the grid after his Honda had stalled at the start of the warm-up lap.
Descombes took a comfortable victory from Choi and Kwong, while De Souza beat Ida on the line for the fourth place.

RACE 3 – Descombes encored and claimed his second lights-to-flag victory of the day.
Just like in Race 2, the action was behind the French leader. During the opening lap Yan drove his Ford Focus up to second position, but once again he was betrayed by his car that stopped on lap 2. The two Honda Civic cars of Choi and Lau were also eliminated by technical issues.
Chan, Kwong and De Souza were involved in the fight for the second position; on lap 5 Chan and De Souza made contact, De Souza spun and Chan received a drive through penalty that he did not observe. As a consequence, Chan was later excluded.
Kwong took second behind Descombes, with Ida and Liu finishing third and fourth.