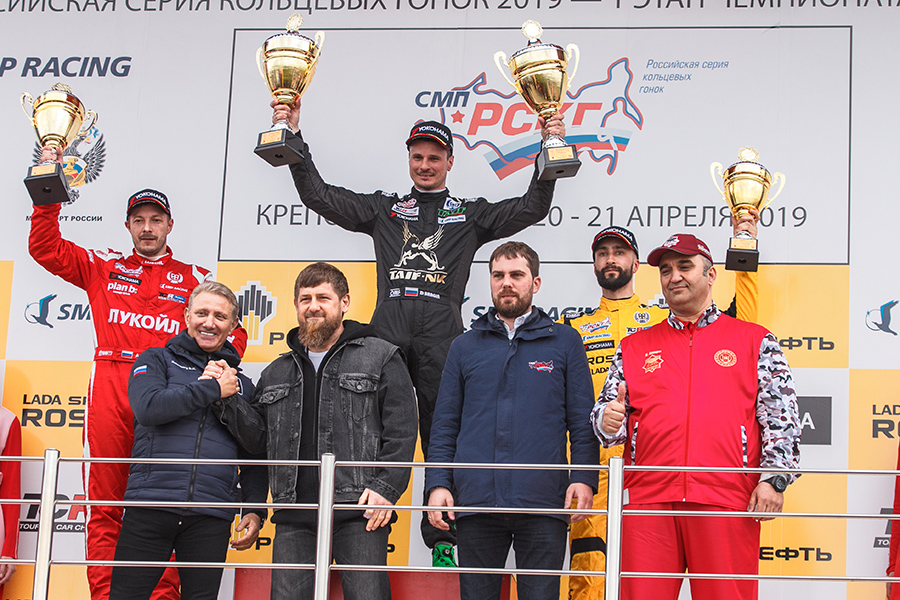 Triple TCR Russia champion Dmitry Bragin keeps on winning despite changing car nearly every year. On his first appearance at the wheel of the Hyundai i30 N car, Bragin made up for a disappointing qualifying and an early spin in yesterday’s Race 1, and claimed a lights-to-flag victory in Fort Grozny’s second race.
Aleksey Dudukalo and Mikhail Grachev completed the podium, while Race 1 winner Kirill Ladygin finished fourth and retained the leadership in the standings.
Dudukalo started from the pole on the grid that featured the top-seven classified in Race 1 placed in reverse order; from this season, the number of the positions to be reversed (between six and ten) is decided by a draw. However Bragin took a better start from the outside of the front row and led into T1. Dudukalo kept Klim Gavrilov at bay to keep the second place, while the LADA duo of Grachev and Ladygin followed in fourth and fifth.
There was commotion in the middle of the field: Ivan Lukashevich spun at T1 after clashing with Pavel Kalmanovich and collected Ilsur Akhmetvaleev; seconds later Ivan Chubarov spun as well at T2. Andrej Maslennikov – third in Race 1 – stalled the engine and found himself at the back of the field.
Lap after lap, Bragin was able to create a small gap, while Lukashevich and Maslennikov began elbowing their way through the field. The top positions did not change until lap 9, when Gavrilov was given a drive-through for jump-start. Then, on lap 12, Burlutskiy stopped on the grass with a technical failure, while local Chechen driver Ibragim Akhmadov crashed after a collision with Aleksandr Marushko. The safety car was deployed to recover the two Volkswagen cars and racing resumed on lap 16 of 20.
Bragin kept control and won from Dudukalo, Grachev and Ladygin, while Irek Minnakhmetov won the close battle for fifth from Anton Badoev, Mikhail Mityaev, Lukashevich, Chubarov and Maslennikov.
TCR Russia will resume at Nizhniy Novgorod for rounds 3 and 4 on May 17/19.