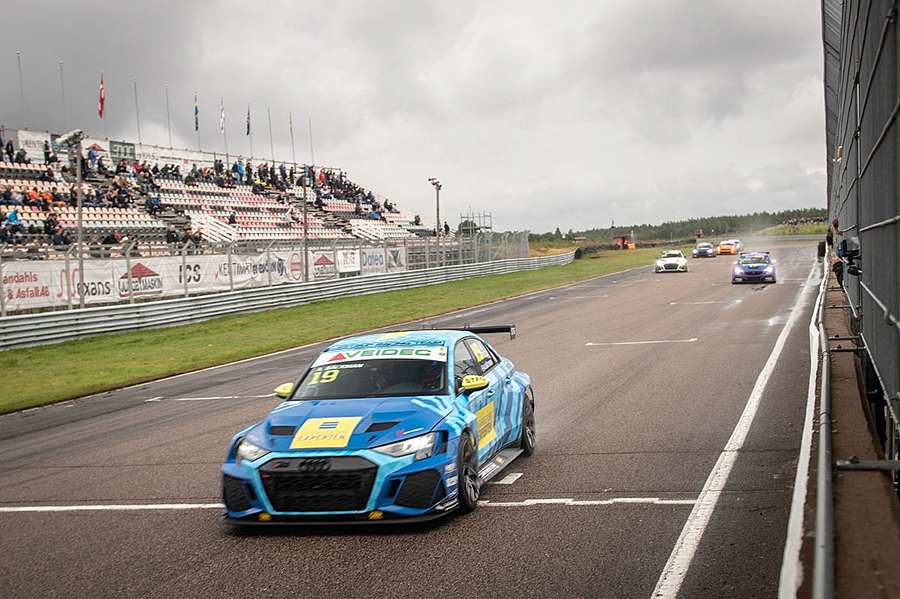 Double-win for Bäckman at Anderstorp closes up the championship

Andreas Bäckman won the first two races of TCR Scandinavia’s all-wet day of racing at the Anderstorp Raceway, while Tobias Brink managed to win the final race. The result is the title fight goes to the wire, with five drivers in mathematical contention.

Race 1 - Hugo Nerman took the pole and led the way at the start ahead of Bäckman, while Nerman’s teammate Brink was straight up to third. Brink’s race however unravelled just one corner later when he was run off into the gravel by Calle Bergman, with Robert Dahlgren then promoted to third. Bäckman had more pace than Nerman and was able to take the lead on lap 3. Dahlgren also got past Nerman a lap later, but the reigning champion was unable to mount a challenge on Bäckman. Nerman continued to drop down the order, with Mattias Andersson claiming third on the penultimate lap.

Race 2 - Bäckman had claimed the pole and led from start-to-finish, while Axel Bengtsson, who had qualified second, was quickly picked off by Nerman and then teammate Dahlgren at the start. The race finished with Bäckman the winner by a clear 4.4 seconds over Nerman, with Dahlgren picking up key points to minimise Bäckman’s gain on his lead with the final podium spot.

Race 3 - The top eight were reversed, as the rain was now even heavier. Marius Solberg Hansen started from pole, but he was quickly passed by Brink, Oliver Söderström, and Andersson. Solberg defended against Dahlgren before running wide, allowing the chasing pack straight past him. Dahlgren then closed in on and passed Andersson for third on lap six, while Brink was under intense pressure from Söderström for the lead. The race was then suspended after Johan Lund spun off into the gravel, with the race restarted with just one lap to go. Brink was able to hold on to the win ahead of Söderström and Dahlgren, while the only key change was Nerman snatching fifth at the line from Bengtsson.

After the race, Söderström’s Audi was disqualified due to a technical breach, promoting Dahlgren to second and Andersson to third.

Dahlgren continues to top the standings, but his lead is now reduced to 24 points over Bäckman. Remaining in contention are Andersson, 37 points behind, Brink, 42 behind, with Söderström now only an outside contender, 55 points behind with 65 available going to the season finale at Mantorp Park on September 30/1 October.