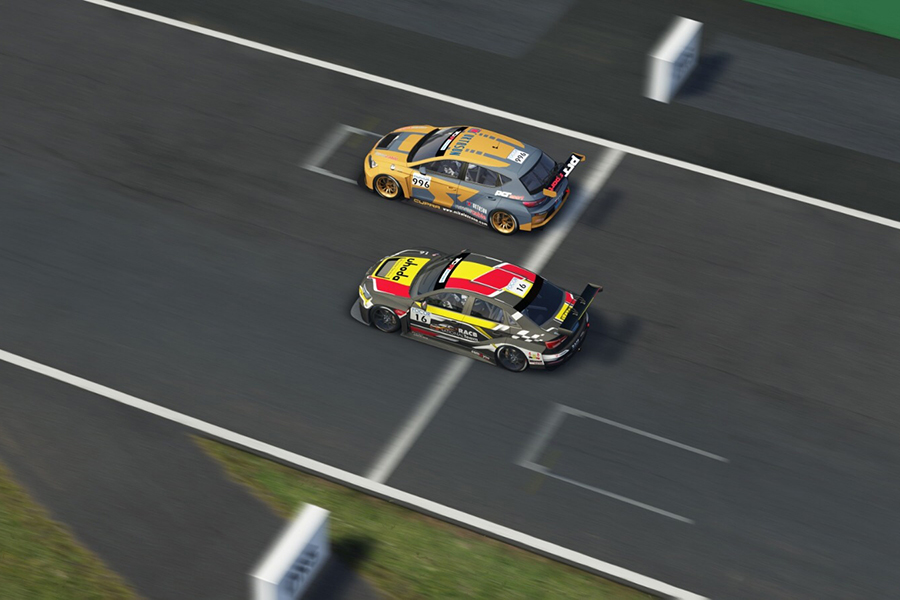 Dramatic Monza races end in wins for Azcona and Nagy

A pair of incident-packed races at the virtual Monza circuit saw the two victories shared by Mikel Azcona and Dániel Nagy, with Nagy denied a perfect result by a computer glitch as he was mo-ments away from crossing the line to win Race 1. There were, however, a large number of con-tacts during both races and so penalties are almost inevitable as the organisers review the inci-dents. Two good finishes by Teddy Clairet means the Peugeot driver is the provisional winner of the two Yokohama tyres from the Monza event ahead of the ‘real’ TCR Europe Series’ visit to the Italian circuit in late September.

In Qualifying, Nagy once again set the fastest time to secure pole position for Race 1. It was the Hungarian driver who was fastest on his first competitive lap, setting a time of 1:54.724. Bence Boldizs (1:55.478) and Teddy Clairet (1:55.680) were also quick at the beginning of the session, although Jimmy Clairet soon went third fastest ahead of his brother with a lap of 1:55.614. As the session went on, Gilles Magnus first grabbed P3 with a time of 1:55.613 and then improved to P2 with a 1:54.861 with around eight minutes remaining. Nagy then improved with a 1:54.472 while Viktor Davidovski (1:54.970) grabbed P3 although a last-gasp sprint for the line saw Boldizs snatch P2 from Magnus with a 1:54.856 in the dying moments of the session.

Race 1 then saw a repeat of the kind of dominant performance we’ve come to expect from Nagy in the series. The pole-sitter managed to hold off a determined attack from Boldizs into Turn 1 and then started to build an impressive lead. Behind the Hyundai, the Audi of Magnus held onto P3 from Teddy Clairet’s Peugeot, while Davidovski’s Honda fell down the leaderboard and was soon in a lowly tenth place after a series of opening-lap clashes. There was contact between Nagy and Boldizs on Lap 1 that saw the CUPRA leave the track, while the similar car of Abdulla Ali Al-Khelaifi was soon in the wall after another incident. Lap 2 saw Mikel Azcona move into P3 behind Teddy Clairet with late entry Luca Filippi dropping to sixth place. In a sign of what was to come later, a terrific battle developed between Azcona and Magnus, with third place changing hands a number of times and the pair making contact on Lap 6. Magnus had the upper hand fol-lowing the incident and started to close the gap on Clairet’s second place, while Nagy had by now built a lead of nearly ten seconds. There was a three-way Peugeot battle at the lower end of the top ten, meanwhile, with Jimmy Clairet passing Julien Briché for ninth place at the start of the penultimate lap, only for the pair to make contact and Clairet then passing Gustavo Moura for P8 on the same lap. All the drama was reserved for the final lap, however, with Magnus finally close enough to attack Teddy Clairet’s second place going down to the Ascari chicane. There was con-tact between the pair and Azcona seized his chance, passing both drivers. There was another contact between the three coming out of the Parabolica, with Azcona managing to hold onto the position, but the biggest drama of all saw Nagy’s computer crash as he headed out of the final corner towards the finish line, denying him the win in a cruel final twist to the race. Azcona there-fore took the win, ahead of Magnus and Nicolas Baert, who’d passed Teddy Clairet when the Peugeot ran wide as a result of the contact coming out of the Parabolica.

Race 2 was then just as dramatic, but for very different reasons. The reversed grid saw Al-Khelaifi start from pole with Lewis Kent alongside. The pair headed into the first chicane in those positions with several contacts occurring behind them. Kent’s Hyundai soon passed the CUPRA to take the lead, although Al-Khelaifi retook the lead on Lap 4. Behind the pair, Briché, Boldizs and Jimmy Clairet were battling for P3, although Clairet took himself out of the scrap when he outbraked himself on the opening lap. Baert then began attacking Boldizs and Briché ran wide at the Parabolica. They ran four-abreast down towards the chicane at the start of Lap 3 and con-tact was inevitable - Boldizs off onto the grass as a result and a recovering Nagy quickly passed Baert for P4 after starting from 13th on the grid. Contact between Filippi and Baert on Lap 4 then saw the Audi drop to ninth. Nagy then passed Kent for P2 on the following lap and Kent unwisely attempted to retake the position going down towards the second chicane, ending up on the grass briefly before making contact with Azcona and dropping to P9. Nagy picked his moment to pass Al-Khelaifi for the lead on Lap 6 going into Ascari and then set about building an advantage, while a spinning Filippi managed to take off Al-Khelaifi and Boldizs on Lap 7, allowing Teddy Clairet to move into second position. Filippi then went wide at the Parabolica and was passed by Mag-nus, Azcona and Baert, which set up a repeat of the Race 1 scrap that had seen Azcona emerge victorious. Third place changed hands several hands in a furious battle that lasted for a number of laps, but when Azcona and Magnus made heavy contact going across the start/finish line at the beginning of the last lap, that left third place to be contested by Baert and Jimmy Clairet. Nagy took the win ahead of Teddy Clairet, while Baert held onto third place and Jimmy Clairet was fourth ahead of Magnus.

The results from Monza mean that Nagy’s lead in the series is now 64 points over Boldizs, with Magnus a further 22 points behind. With so many incidents during the two races, however, it would be unsurprising if there were no penalties applied. The focus next switches to the virtual Zolder circuit, with Qualifying and two more races making up the penultimate event in the TCR Europe SIM Racing series on Monday 13th July, starting at 20.00 CEST.