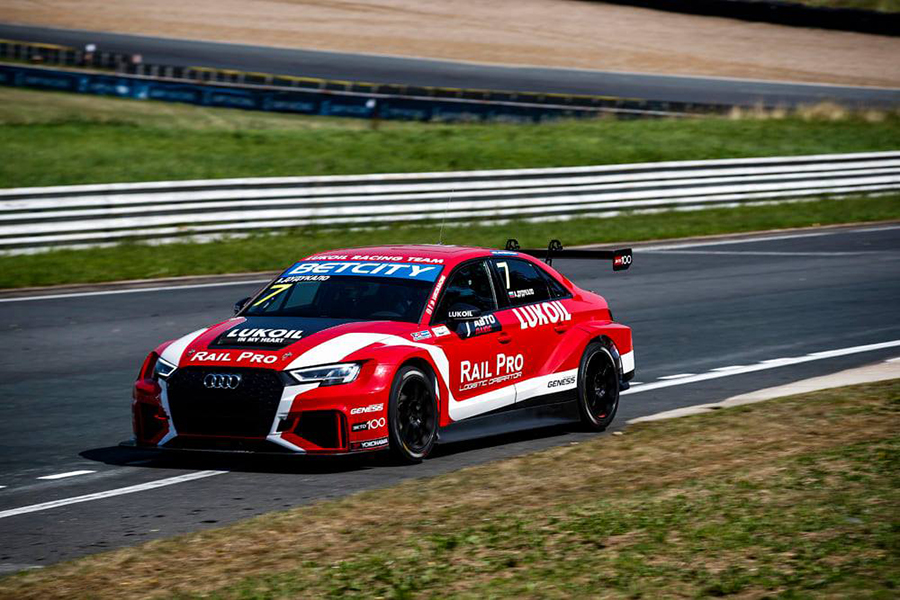 Aleksey Dudukalo drove his Audi RS 3 LMS to victory in a red-flagged Race 2 that ended the opening weekend of TCR Russia. The LUKOIL Racing Team’s driver started from the pole position and defended his leadership from the assaults of the LADA Vesta cars of Mikhail Mityaev and Kirill Ladygin who had finished 1-2 in the morning’s Race 1.
Dudukalo and Grigory Burlutskyi shared the front row of the reversed grid; Klim Gavrilov joined after missing Race 1 because of a fuel pump failure, but his Hyundai stopped on the warm-up lap with another technical issue.
At the start, Dudukalo took the lead from Ladygin, Dmitry Bragin, Burlutskyi and Mityaev. The latter was able to pass the three drivers ahead and moved into P2 by the end of the first lap. The race was then neutralized by the safety car after a crash that involved Anton Nemkin’s Honda Civic and Andrej Radoshnov’s VW Golf.
Action resumed on lap 7, with Dudukalo closely followed by Mityaev; behind them, Ladygin overtook Bragin for P3 and began to close in on the two leaders. The reigning champion was stubbornly defending the fourth position from Burlutskyi, Ivan Lukashevich and Andrej Maslennikov. On lap 11, Burlutskyi passed Bragin for P4 and soon joined the leading trio of Dudukalo-Mityaev-Ladygin in a four-way battle for victory.
Bragin and Lukashevich made contact while fighting for P5 and on lap 15, the latter slowed down and then stopped on the track. Maslennikov benefited from the situation and passed Bragin for P5, but immediately after that, the red flag was waved with two laps still to go, sanctioning Dudukalo’s victory from Mityaev, Ladygin and Burlutskyi.
TCR Russia will resume at the new Igora Drive circuit, nearby St. Petersburg on July 25/26.