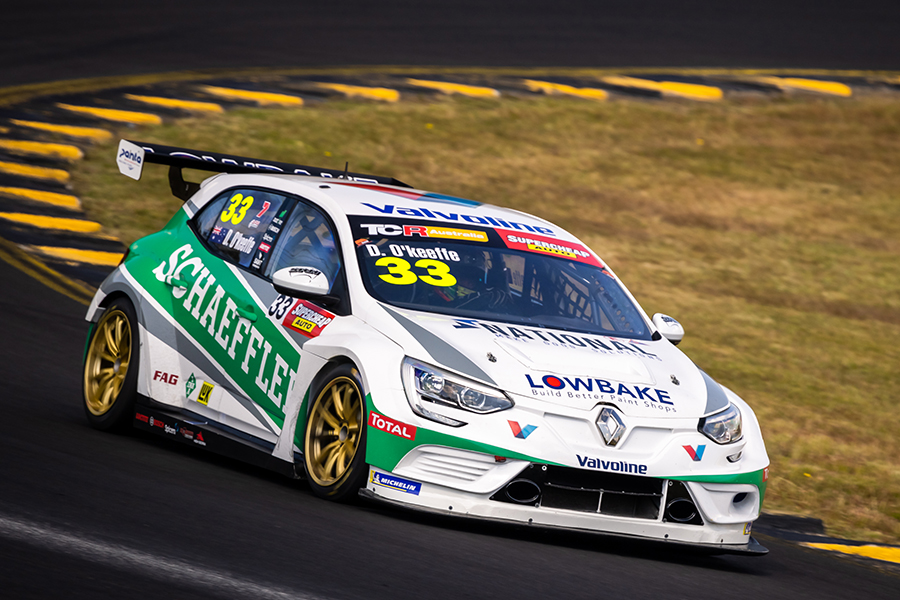 Dylan O’Keeffe puts the Renault Mégane on pole at Sydney

The Qualifying for TCR Australia’s fourth event at Sydney Motorsport Park overturned completely the hierarchy of the championship as the Renault Mégane, Honda Civic and Hyundai i30 N cars claimed the top five positions.
After posting the fastest lap in the second Free Practice, Dylan O’Keeffe placed his Garry Rogers Motorsport-run Renault on pole position for Race 1, beating Josh Buchan’s Hyundai by less than two tenths. O’Keeffe’s teammate James Moffat qualified third ahead of John Martin’s Honda and Nathan Morcom’s Hyundai.
Chaz Mostert who had won five of the previous six races, building a 63-point lead in the standings, couldn’t place his Audi RS 3 LMS higher than sixth, while Aaron Cameron who is second in the points ranked ninth in his Peugeot 308. Lee Holdsworth and Jordan Cox who had shared victories in the season opener in Symmons Plains at the wheel of their Alfa Romeo Giulietta cars did not even make the cut for Q2.
There was a thrilling battle for the positions in Q1, with Martin, Mostert, Tony D’Alberto and Buchan taking turns on top of the timesheet. Eventually Buchan posted a fastest lap of 1:33.8424, ahead of Morcom (1:34.2010), Martin (1:34.2892), O’Keeffe (1:34.3031) and D’Alberto (1:34.3148).
The others who advanced to Q2 were Jason Bargwanna, Cameron, Moffat, Michael Caruso and Mostert who managed to make the top-ten with his last lap, while Alfa Romeo drivers Holdsworth and Cox were classified 13th and 16th respectively.
In Q2, O’Keeffe topped the list throughout the whole ten minutes, improving the fastest lap from 1:35.6231 to 1:33.8916 and finally to 1:33.3867. Martin was provisionally placed second with a lap of 1:33.8141, but was then demoted to fourth by Buchan’s 1:33.5786 and Moffat’s 1:33.7863.
Race 1 will start at 13:25 local time (05:25 CEST); live streaming at www.tcr-series.com.