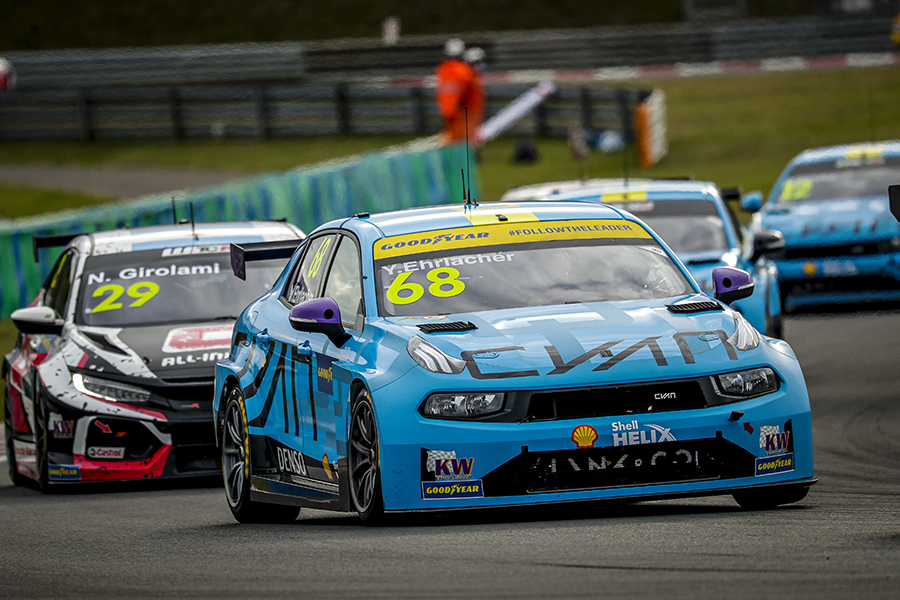 Yann Ehrlacher won the second WTCR race of the day at the Hungaroring in his Cyan Racing Lynk & Co 03, finishing ahead of teammate and uncle Yvan Muller, with the Team Mulsanne Alfa Romeo Giulietta of Jean-Karl Vernay completing the podium.
Bence Boldizs started from the pole in his Zengő Motorsport CUPRA Leon Competición, but made a slow getaway which allowed Muller straight up into the lead ahead of Ehrlacher, with Muller then allowing his nephew through in a coordinated pass at Turn 2, while Vernay was also up to third.
There was trouble behind as the Münnich Motorsport Honda Civic of Néstor Girolami ran into the rear of the other Zengő CUPRA of Mikel Azcona, with both cars out of the race with damage, while the Comtoyou Racing Audi RS 3 LMS of Tom Coronel also spun the BRC Hyundai i30 N of Gabriele Tarquini around in the mid-field.
Ehrlacher then began pulling out a gap over Muller, who kept Vernay’s Giulietta at bay, with Santiago Urrutia running just behind in the third-best placed of the Lynk & Co cars.
On lap seven, the safety car was out after an incident between the Hyundai of Luca Engstler and the Audi of Coronel, with Engstler’s car heavily damaged and requiring recovery.
At the restart, Ehrlacher and Muller quickly pulled away again from Vernay, who had to settle for the final podium spot ahead of Urrutia.
Esteban Guerrieri, who will start the final race from pole position in his Münnich Motorsport Honda, had a cautious race, and just moved up two spots to eighth in the final order; he stays second in the standings, now 40 points behind Ehrlacher, while Muller has moved into P3 and Coronel – who was given a drive-through penalty for the incidents with Tarquini and Engstler – has dropped to fourth.
Race 2 will start at 16:15 CEST.