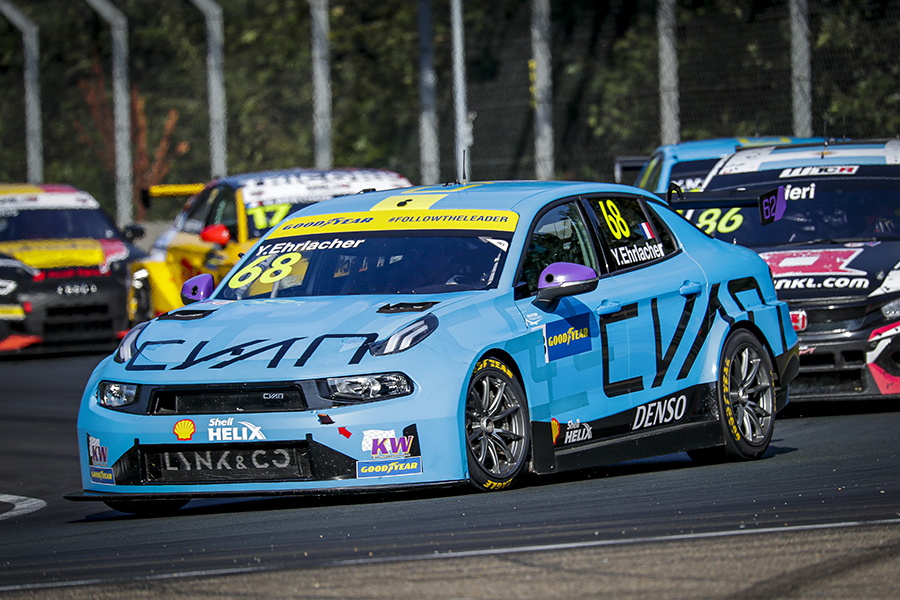 Yann Ehrlacher led a trio of Lynk & Co cars under the chequered flag of WTCR Race 2 at Zolder, a result that propelled the young French driver on top of the standings at the end of the season opener.
Ehrlacher inherited the lead in lap 5, when pole sitter Nathanaël Berthon served a drive through for a false start. He rejected the assaults of Gilles Magnus during the first half of the race and then was able to pull away, leaving Magnus under the threat of Yvan Muller and Santiago Urrutia who eventually were both able to pass him and secure the full podium for the Chinese manufacturer. Race 1 winner Néstor Girolami managed to defend the fifth position from the attacks of Tom Coronel and dropped to second in the standings, seven points behind Ehrlacher.
Berthon took the lead from the pole, ahead of Ehrlacher, Magnus and Muller who has passed Urrutia for P4; behind them, Attila Tassi and Thed Björk collided and hit the tyre stack at the chicane; they both retired, and the safety car was deployed.
When racing resumed in lap 4, Berthon was given a drive-through for jump-start and so Ehrlacher moved into the lead, followed by Magnus, Muller and Urrutia. Behind the four leaders, Girolami defended his P5 from Coronel, while Jean-Karl Vernay followed them in seventh.
Positions remained frozen until lap 15, when Muller overtook Magnus for P2; one lap later the young Belgian lost the third place to Urrutia. The final thrill was provided by Jack Young and Tassi who made contact while fighting for P15; Young’s Renault went off onto the gravel, which prompted the safety car into action again until the chequered flag hailed the 1-2-3 finish for the Lynk & Co cars.
The WTCR will resume for rounds 3 and 4 ant the Nürburgring on September 24/26.