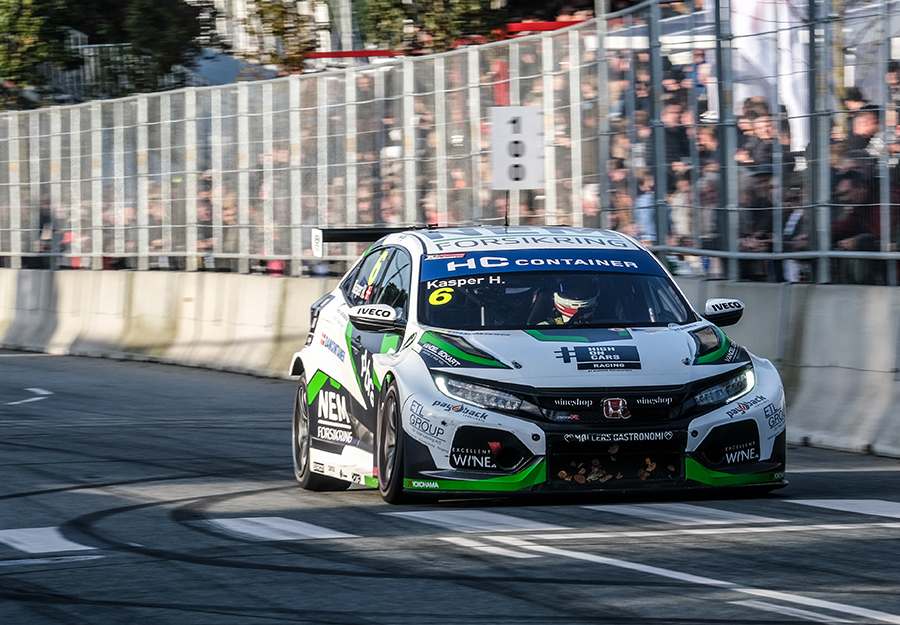 Casper Elgaard and Kasper H. Jensen have won the final two races of TCR Denmark at the Aarhus street circuit, which saw a dramatic crash at the start of the day’s final race taking out championship contenders Jan Magnussen and Nicolai Sylvest.
In the first race of the day, Kenn Bach started from the pole of the top-six reversed grid, with Philip Lindberg alongside him.
However, it was Casper Elgaard who made the best start, threading both cars from third on the grid to put his Brian Madsen Sport Peugeot into the lead, while Bach was overtaken before the hairpin by Michael Markussen.
On lap three, championship leader Jensen was let past by his Massive Motorsport Honda teammate Bach for third into the hairpin, and Jensen began to close on the leading Peugeot cars.
A lap later and Gustav Birch made an ill-judged move on Johnny Vejlebo’s Peugeot at the hairpin, where he overshot and hit the rear of Kristian Moe Sætheren’s Alfa Romeo, with the front of Birch’s Peugeot 308 destroyed. The safety car was called as Birch’s car was recovered, resuming with just four minutes of time remaining. However, Birch was disqualified from the race.
Elgaard then held off Markussen to take his third win of the season, with Jensen completing the podium. The two LM Racing CUPRA cars of Magnussen and Sylvest both managed to pick off Bach’s Honda on consecutive laps to grab fourth and fifth, and Sylvest also picked up the two points for the fastest lap.
The final race of the day would prove to be catastrophic. Magnussen started from pole ahead of Elgaard, but Jensen made a fantastic start from third and was trying to go past both cars through the middle, just as Elgaard had pulled off in Race 2. But as Magnussen and Elgaard closed the gap, the resulting squeeze saw all three cars making contact, with Magnussen coming off the worst.
The CUPRA driver would bounce off the right-hand wall, and then back across the track, causing absolute carnage - with Bach’s Honda also climbing the wall on the other side in avoidance along with Sylvest’s CUPRA.
With cars blocking the track the race was red-flagged, and it took over 30 minutes to extract the broken cars of Magnussen, Sætheren, and Michael Carlsen.
Bach was able to pit for new tyres and joined the back of the pack, but Sylvest was headed into the pit lane and retired.
Elgaard was now on pole ahead of Jensen, but Jensen made the better start and made his way past down the inside at the hairpin, which also allowed Markussen to get a run around the outside and take second place from the four-time champion as well.
Elgaard’s race came to an end a lap later, after he hit the inside wall at the chicane and broke his front-right suspension. The car would be left on track for the remainder of the race, managed by a double-waved yellow flag.
This meant Lindberg was now promoted to third in his Insight Racing Alfa Romeo, but Lindberg’s race also ended with five minutes to go at the same chicane, slamming into the wall and spinning around.
Jensen went on to win the dramatic race ahead of Markussen, while Jacob Mathiassen finished third in the last remaining Alfa Romeo.
Jensen’s win with his main rivals not finishing means he now has a 28-point lead over Elgaard in the standings, with Markussen third, 48 points back, and Magnussen and Sylvest tied in fourth, now 79 points adrift.
The championship will return to Jyllandsringen for the third time this season on October 2/3.