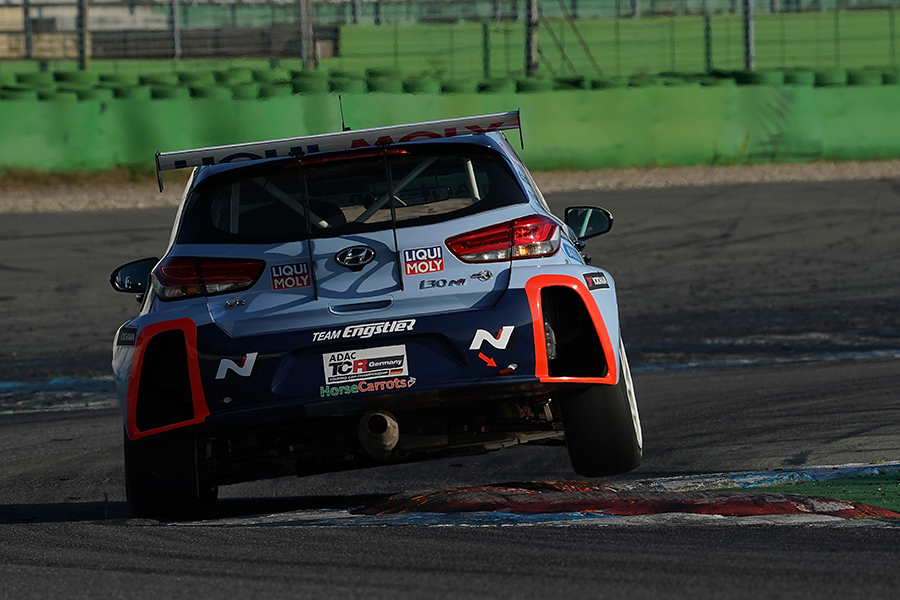 Engstler claims pole at Hockenheim and gets closer to the title

Luca Engstler topped the first Qualifying session of the ADAC TCR Germany season finale at Hockenheimring and moved another step towards the champion’s crown.
Dominik Fugel was the first to clock a significant fast lap of 1:48.523 at the beginning of the session, followed by his brother Marcel who was timed at 1:48.566.
They did not stay for long on top of the timesheet, as Jonas Karklys posted a new provisional fastest lap of 1:47.691 that was immediately beaten by Engstler’s 1:47.501.
Martin Andersen advanced to third, with a lap of 1:48.461, but then spun off causing the session to be red-flagged.
Qualifying resumed with less than eight minutes left and a number of drivers improved straightaway. Robin Jahr (1:48.024) climbed to third and Dominik Fugel (1:48.052) to fourth; Marcel Fugel posted a 1:48.300 that was immediately disallowed for track limit infringements.
However, it was Engstler who improved again to 1:47.313 claiming the pole position. As the chequered flag was waved, Dominik Fugel improved his lap time to 1:48.027 but not his fourth position and he was then demoted to fifth by Andersen who qualified third with a lap of 1:48.022, two thousandths faster that Jahr and five than Fugel.
In a session that saw four Hyundai cars on top, Karklys and Jahr were classified second and fourth, achieving their best qualifying results so far in the season, while RC2 Junior Team’s guest driver Rubén Fernández ranked a brilliant sixth, the best of the CUPRA drivers, with Eric Scalvini in seventh position.
The first race will start at 12:50 CEST, with live streaming at www.tcr-series.com.