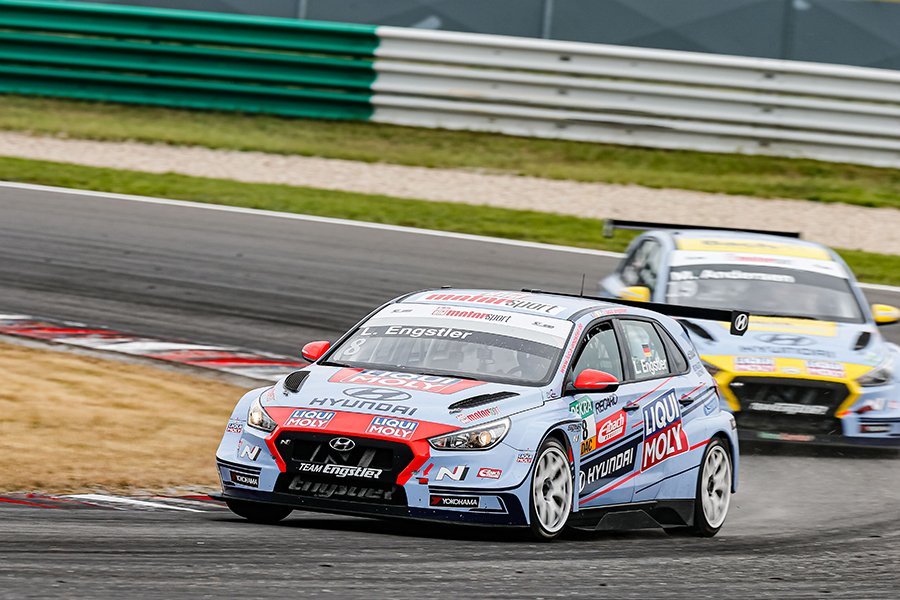 Engstler encores in TCR Germany’s second race at the Lausiztring

Luca Engstler made a double in the ADAC TCR Germany event at the Lausitzring, scoring his second victory of the weekend in Race 2 and extending his leadership in the standings to 59 points over Dominik Fugel.
From second on the grid, Engstler made a great start and entered first into Turn 1 ahead of Andersen who had the pole position. Behind the two Hyundai cars, Dominik Fugel maintained his third place, while Nico Gruber jumped into fourth from P6 on the grid. Marcel Fugel too had an amazing get off, moving up from ninth to fifth.
Günter Benninger sprinted well from the back of the grid, but outbraked himself before Turn 1 and lost control of his CUPRA, crashing into the back of Szymon Ładniak’s Volkswagen Golf GTI and sending it to collect the Hyundai of Patrick Sing. All three cars were off the race while the safety car was deployed.
At the restart, in lap 5, Engstler and Andersen pulled away, while Dominik Fugel had to defend third from Nico Gruber, who was kept under pressure from Marcel Fugel. Eric Scalvini too joined the battle but despite his efforts the Italian did not find a gap to pass Marcel Fugel; instead he found himself chased by Robin Jahr, Christopher Röhner and Jonas Karklys who had passed Philipp Regensperger when he had gone wide at Turn 1 at the beginning of lap 9.
In lap 11, Jahr passed Scalvini for P6 and Karklys passed Röhner for P8, which is the way they finished, with Engstler scoring his fourth win of the season from Andersen, Dominik Fugel, Gruber and Marcel Fugel.
The championship will resume next week at Hockenheim for rounds 7 and 8.