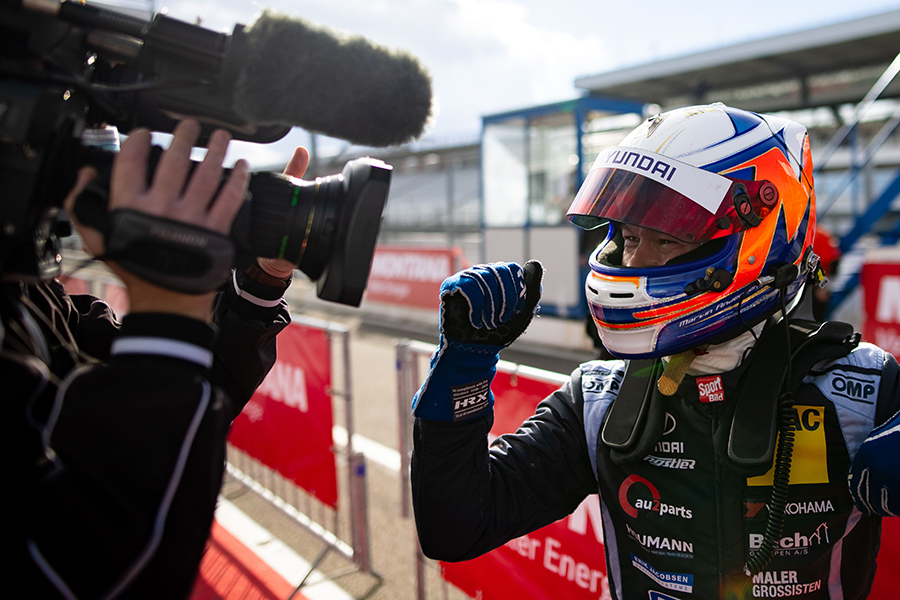 Luca Engstler secured the ADAC TCR Germany title before the last event of the season by finishing fourth in the second race at Hockenheim that was won by Eric Scalvini.
Scalvini, who had set pole position in the morning’s Qualifying started well and bluntly swerved to the right forcing Engstler onto the pit lane exit to negotiate the first bend. Dominik and Marcel Fugel made great starts from P5 and P7 on the grid and benefited from the commotion to move up to second and third ahead of Jonas Karklys and Martin Andersen, while Engstler rejoined in sixth position.
In lap 3, Engstler passed both Andersen and Karklys, advancing to P4 and began to put the pressure on Marcel Fugel.
In lap 6, Sergio López overtook Andersen for fifth; in the following lap Albert Legutko who was battling for the eighth place with his Polish countryman Szymon Ładniak made a mistake and went wide. As it re-entered on the track, Legutko’s Honda Civic made contact with Rubén Fernández’s CUPRA Leon Competición that pulled over with a broken suspension. This prompted the safety car into action until the end of lap 10.
When racing resumed, Karklys overtook Andersen for P6, while further down the field Christian Voithofer spun in T12, forcing his Wimmer Werk Motorsport teammates Peter Gross and Günter Benninger and Legutko to run wide over the grass in avoidance.
In lap 14, Legutko’s car stopped on the track with a smoking engine and the safety car was deployed again. Action resumed for the two final laps with Scalvini archly braking and accelerating to take Dominik Fugel by surprise. The Italian went on to claim his fourth win of his maiden season in TCR Germany, despite being shown the black-and-white flag twice, for the latter trick and for his manoeuvre against Engstler at the start. Dominik and Marcel Fugel completed the podium, while Engstler’s fourth place meant he was crowned the 2021 champion. López finished fifth ahead of Andersen but was then dropped to 10th by a 5-second penalty for jump start.
The ADAC TCR Germany will come to an end at the Nürburgring on November 6/7. With the title awarded to Engstler, attention shifts to the battle for the second position between Dominik Fugel and Scalvini who are split by seven points, while Andersen is also in contention, 22 points behind Fugel.