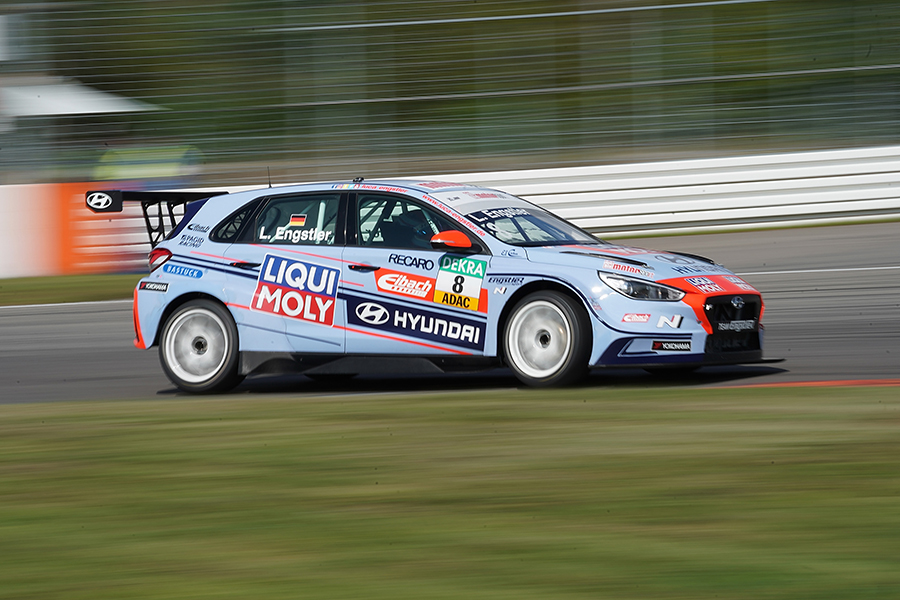 Luca Engstler further extended his leadership in the standings of the ADAC TCR Germany with a lights-to-flag victory in the second race at Hockenheim. This was the fifth win of the season for the German driver and his Hyundai i30 N.
Race 1 winner Eric Scalvini finished second and reinforced his second position in the points as well, though his gap from the leader has grown up to 63 points.
Engstler started well from the pole, leading from Martin Andersen, René Kircher and Scalvini. Soon the latter passed Kircher for P3 and the Team Oettinger driver dropped down to seventh as he was passed by Marcel Fugel, Philipp Regensperger and Nico Gruber as well. Gruber then moved into P5 ahead of Regenspeger.
In lap 2, Scalvini passed Andersen for second, while Kircher and Dominik Fugel overtook Regensperger climbing to sixth and seventh respectively. Fugel moved up further, he passed Kircher for P6 and then began chasing the fifth-placed Gruber.
However, in lap 6, following a contact with Gruber, Fugel’s pace faded as the front splitter of his Honda Civic got loose and one lap later the Team ADAC Sachsen driver pitted and retired, which actually vanished his hopes to stay in contention for the title.
Up front, Engstler was able to control Scalvini and kept him at a safe distance, while Marcel Fugel kept on threatening Andersen who was running third. The pair was closely followed by Gruber.
Further behind, Kircher defended the sixth place under pressure from Regensperger and Jonas Karklys. In the final part of the race, Karklys advanced to sixth, while Albert Legutko overtook Kircher and Regensperger moving up into P7.
As Engstler stretched his advantage to more than five seconds over Scalvini, Andersen and Marcel Fugel clashed during the final lap while fighting for second. Fugel limped to the end in 12th place with a broken suspension, while Andersen dropped from third to fifth, as both Gruber and Karklys managed to pass him.
The ADAC TCR Germany will resume at the Sachsenring, on October 2/3.