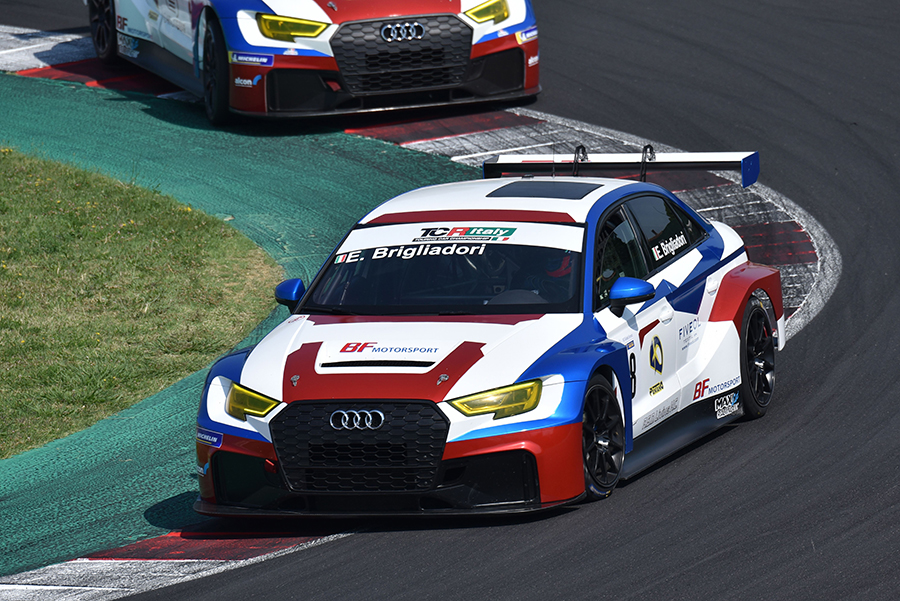 After inheriting his maiden TCR Italy victory yesterday following the exclusion of Felice Jelmini for a technical infringement, Eric Brigliadori has claimed his first actual victory in Misano’s Race 2.
The 20-year-old Brigliadori stole the lead from Marco Pellegrini during the penultimate lap with a masterpiece overtaking manoeuvre on the inside line at the last turn. Pellegrini who had led for most of the race crossed the finishing line in second position ahead of Jelmini and so retained the leadership in the standings, ten points clear of Brigliadori.
Salvatore Tavano made a great start from P3 on the grid and moved into the lead ahead of pole sitter Michele Imberti, while Pellegrini and Brigliadori followed in third and fourth positions respectively.
Pellegrini passed Imberti for P2 on lap 1 and then stole the lead from Tavano in lap 3. At the same time Jelmini climbed to P4, overtaking Ettore Carminati and Imberti. Moments later Tavano lost one more place to Brigliadori who began to chase Pellegrini.
In lap 5, Franco Girolami overtook Imberti for P6, while Jelmini was on the tail of Tavano’s car and eventually overtook the reigning champion for P3 in lap 6.
In lap 8, the fight for P10 between Mauro Guastamacchia, Simone Pellegrinelli and Alessandro Giardelli resulted in the latter punting Pellegrinelli’s car into a spin.
Brigliadori who had closed the gap to Pellegrini, finally managed to pass him at the end of lap 15, while Jelmini could not get close enough to try an overtaking move and had to settle in third position. Tavano rejected a late attack from Carminati to finish fourth, while Imberti won the DSG class and took the seventh place overall.
The next event of TCR Italy will take place at Imola on August 28/30.