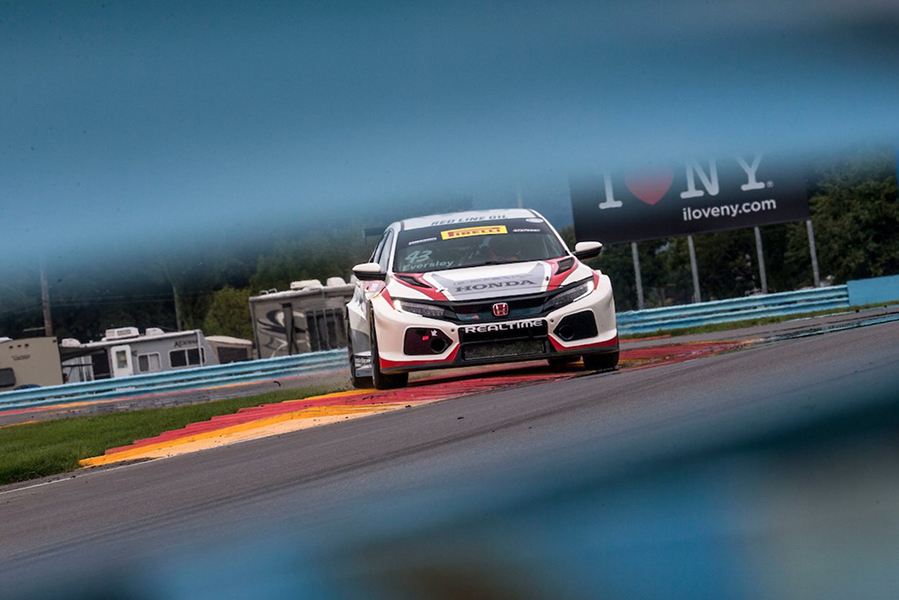 The two contenders for the title of the Pirelli World Challenge’s TCR class delivered an exciting battle in the penultimate round of the season, Race 1 at Watkins Glen.
For the whole 40 minutes, RealTime Racing’s Ryan Eversley and Brian Herta Autosport’s Michael Lewis ran together, separated by a gap that varied between two and six tenths of a second.
At the start, Eversley sprinted from pole position to take the lead, but Lewis managed to overtake his own teammate Mark Wilkins and followed him. Lewis’ Hyundai i30 N shadowed Eversley’s Honda Civic FK7 for 35 minutes, then with only five minutes left on the clock, Lewis began to put a huge pressure on his rival. Several times, during the three final laps, Lewis seemed to have found a gap to pass, but Eversley was always able to close the door and eventually took the chequered flag with a margin of two tenths.
Behind them there were two other pairs of cars involved in close battles. Eversley’s and Lewis’ teammates – Mason Filippi and Wilkins – were fighting for the third position. Wilkins was ahead in the first part of the race, but Filippi overtook him on lap 5, immediately after the end of a safety car period caused by oil on the track. For the rest of the race, Filippi was able to resist Wilkins’ attacks and claimed his first podium results in the series by a margin of three tenths.
The fifth place was contested by Nate Vincent in the FCP Euro-HRD Volkswagen Golf GTI and local driver JT Coupal in the Compass Racing Audi RS3 LMS; on the penultimate lap Coupal stole fifth from Vincent and beat him by one tenth.
In the standings, Eversley leads Lewis by nine points and so the title fight will be decided tomorrow in the second race that will start at 3:25pm local time (21:25 CET) with Lewis on pole position and Eversley alongside him; live streaming at www.tcr-series.tv.