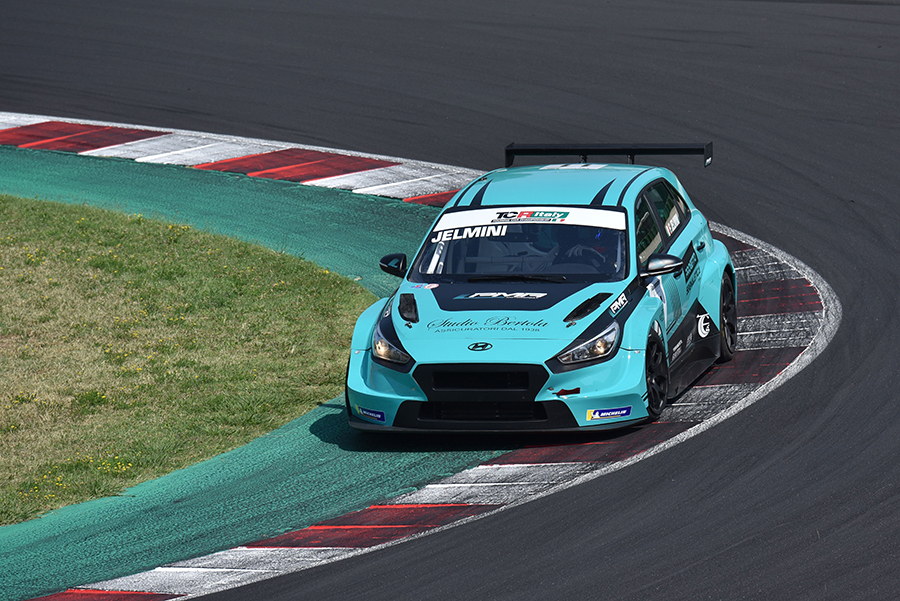 Felice Jelmini converts the pole in his maiden win

In today’s Race 1 at Misano, Felice Jelmini made up from being stripped of his maiden victory in TCR Italy two weeks ago at Mugello. Under the scorching sun of the Adriatic coast, the PMA Motorsport’s driver converted his pole position in a lights-to-flag win and inflicted a 13-second gap to Eric Brigliadori who claimed his first podium position, while the reigning champion Salvatore Tavano completed the podium in third position.
At the start, Jelmini took the lead from Franco Girolami, Tavano who had jumped into third from P6 on the grid, Marco Pellegrini, Mauro Guastamacchia and Brigliadori.
During the first two laps, Pellegrini and Brigliadori climbed to third and fourth ahead of Tavano and Guastamacchia, while Matteo Poloni was the first to retire with a flat front tyre at the end of lap 2.
While the leader Jelmini was able to create a gap, Pellegrini spun off in lap 4 and dropped from P3 to P6. Three laps later Guastamacchia too made a mistake, dropping from P4 to P7.
In lap 10, Brigliadori overtook Girolami for second, as the Argentine’s pace began to fade due to tyre wear; two laps later Girolami pulled up and retired, which promoted Tavano and Pellegrini to third and fourth respectively. Behind them, Tavano’s teammate Simone Pellegrinelli provided the last thrill, passing Ettore Carminati for P5; however, the young rookie was demoted to P8 by a five-second penalty for a grid infringement.
Eric Scalvini finished seventh overall and won the DSG class, beating Micheli Imberti by 6 tenths.
Pellegrini has retained the leadership in the championship standings, but his advantage has been cut to six points only over Jelmini, while Tavano is third, a further four points adrift.
Race 2 is scheduled to start tomorrow at 11:50 local time (CEST) and will be streamed live at www.tcr-series.com.