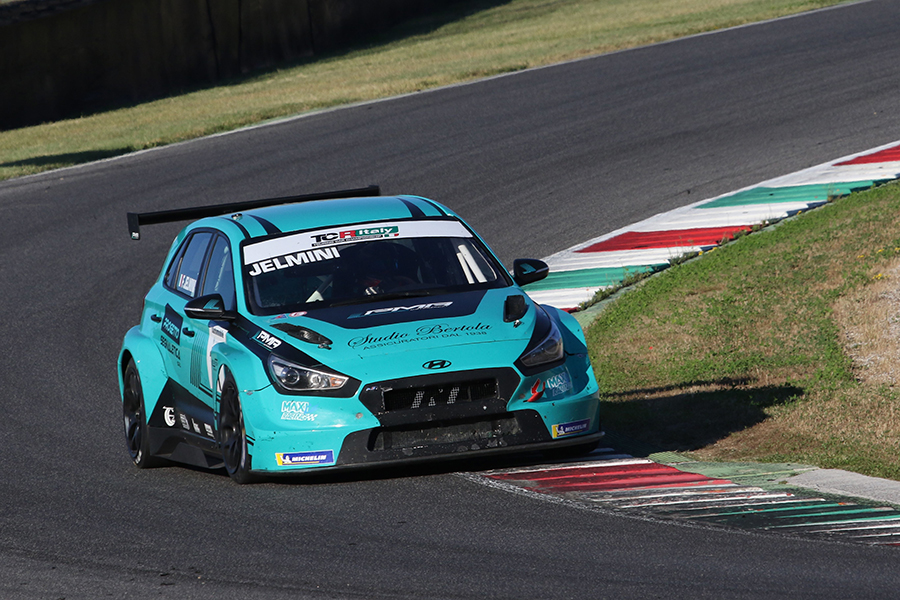 After recovering from 23rd to third in yesterday’s TCR Italy’s Race 1 at Mugello, Felice Jelmini improved that impressive effort with an outstanding victory in Race 2 from the last spot of the grid.
The 25-year old Jelmini had been relegated at the back of the grid in both races by a power steering failure of his PMA Motorsport Hyundai in Qualifying. In both races he proved the fastest on the track, clocking the best lap times and completing a huge number of overtaking manoeuvres. In Race 2, he eventually stole the first place from Damiano Reduzzi – who had led from lap 2 – during the final lap. Reduzzi salvaged the second place, while Franco Girolami completed the podium. The win also meant that Jelmini has left Mugello as the first leader in the standings.
At the start, Reduzzi, Salvatore Tavano and Girolami sprinted ahead of the front row cars of Simone Pellegrinelli and Francesca Raffaele. It took only a few turns to Tavano for stealing the lead from Reduzzi, however the Race 1 winner had to pit at the end of lap 2 with a flat front tyre. At the same time a contact between Marco Pellegrini and Michele Imberti resulted in the latter’s car stranded onto the gravel trap, and so the safety car was deployed.
When racing resumed, on lap 4, another collision involved Jelmini, Raffaele and Pellegrinelli who went off onto the gravel; the safety car took the track again.
At the restart, on lap 6, Reduzzi led from Eric Brigliadori, Girolami, Pellegrini and Jelmini; Tavano had rejoined after his pit stop and ran in 17th position.
As Girolami and Pellegrini were fighting for P3, Jelmini seized the opportunity and passed them both in one move during lap 9. One lap later, the battle for the lead resulted in a contact between Reduzzi and Brigliadori; once again Jelmini was swift to take advantage of the situation and passed Brigliadori for P2 and then, during the final lap, easily stole the lead from Reduzzi whose car was unbalanced after the contact.
As Jelmini took the chequered flag ahead of Reduzzi, Brigliadori went wide at the last turn with a flat front tyre and so Girolami inherited third before Pellegrini, Ettore Carminati and Alessandro Giardelli who won the DSG class. Tavano recovered to finish in ninth.
TCR Italy will resume at Misano in two-week time, from July 31 to August 2.