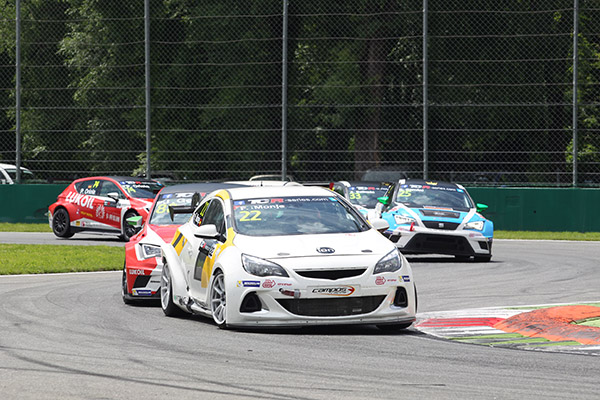 Fernando Monje put the Opel in the top league

The “Man of the Race” recognition went without hesitation to Fernando Monje. At Monza, the 21-year-old driver from Barcelona was driving for the first time the Opel Astra OPC of Campos Racing, although he has been involved in this project since the very beginning as part of the management staff.
Not only Monje signed the best performance in qualifying (6th) of the car so far, but he produced two superb races, clinching a 5th in Race 1 and a 3rdin Race 2, where he led for five laps, earning everybody’s appreciation and the congratulations from an expert racer as Gianni Morbidelli: “It was very difficult to pass Fernando in Race 2 because he drove very well and was doing exactly what he had to do to defend his position in a very clean way where his car was slower than mine and rebuilding enough gap in the straight, where the Opel was very fast.”

A delighted but laid-back Monje explained: “It was an unexpected but great weekend. We progressed well throughout it, showing performance, reliability and consistency. The new sequential gearbox worked well, while we struggled a bit with the brakes. I am very happy for Campos Racing that has been working hard and well since the beginning of the season. Here at Monza, we had a very good top speed, as everybody could see, but were slower than our opponents in key corners. This obliged me to be always on the limit, especially when braking, and adopt defensive lines when needed, but I think we did it well and put on an entertaining show.”