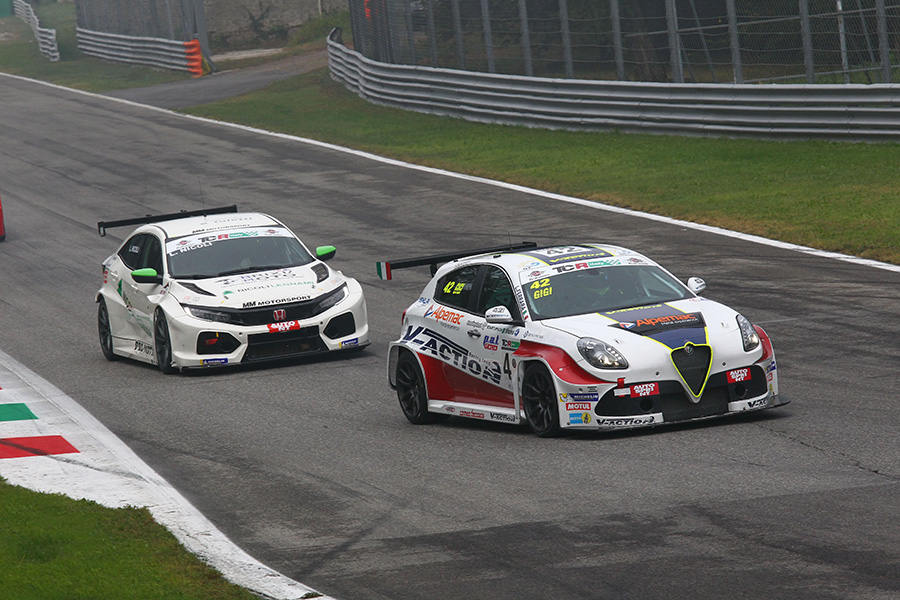 Ferrara encores to take second in the championship

Luigi Ferrara and his V-Action Alfa Romeo Giulietta concluded in style the 2018 season of TCR Italy by encoring yesterday’s success with a second victory in today’s Race 2 during the season-closing event at Monza.
This was the fifth race win for the driver from Bari who finished a close runner-up in the standings, only 2.5 points behind Salvatore Tavano who had been crowned champion yesterday.
Today, the SEAT Motorsport Italia driver couldn’t finish better than 12th after serving a drive-through following a contact with Eric Scalvini’s BRC Hyundai i30 N at the first chicane in the early stages of the race; Scalvini was then forced to pit for repairs.
At the start, that was delayed by 45 minutes because of fog, Igor Stefanovski took the lead over poleman Matteo Greco, in a duel between the two Cupra cars that filled the first row of the reverse grid. They were followed by Scalvini, Enrico Bettera and Ferrara.
Soon, Bettera climbed to second and took the lead in lap 4, but a couple of laps later Stefanovski retook command with a daring overtaking manoeuvre at the first chicane, which resulted in a contact that spoiled Bettera’s race.
The Stewards imposed a drive-through to the Macedonian who dropped to tenth; Ferrara inherited the lead and won with a comfortable margin over Lorenzo Nicoli (MM Motorsport Honda Civic) and Greco (winner of the DSG Trophy race and third in the championship final standings). Massimiliano Gagliano’s Cupra, Edoardo Cappello’s Alfa Romeo and Andrea Larini’s Cupra filled the positions between four and sixth.
Today’s Race 2 ended a very entertaining season of TCR Italy that has established itself as one of the top TCR national series.