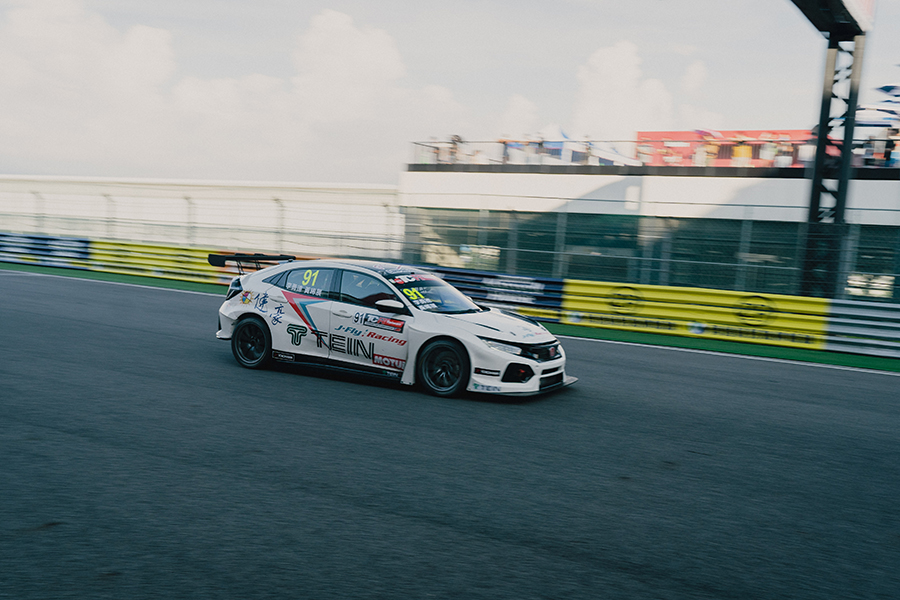 Fist-Team AAI claimed a third consecutive victory from the three rounds of TCR Chinese Taipei held so far. However, while the team’s leading #15 Honda Civic of Chen Junhua and Liu Weizhi did not finish, it was the #91 sister car of Li Yongde and Huang Xizhan, a late entry, that dominated the one-hour race.

The Fist-Team AAI cars filled the front row, with Chen on pole. Chen made a good start, but as he entered into T1 he clashed with the Border Team Civic Fk2 of You Yihao that had taken to the inside from P3 on the grid. Both cars spun and rejoined at the back of the field, while Li’s #91 Honda took the lead from a pair of Audi cars, the #52 Speed Verse Racing of Dai Xiaoxiang and the #77 Motul 300V of Wang Shangyuan.

Shangyuan soon lost contact from the leading pair and struggled to defend the third position from Yuan Shengping in the #21 YSR Motorsport Volkswagen Golf GTI.

The first to pit for the driver change was the #85 Speed Verse Racing Audi shared by Gao Jiahong and Zhou Annian after twenty minutes, followed by the #77 Audi with Yang Mengqiao replacing Shangyuan. Nearly at the same time, the points leader #15 Honda pitted with some technical issues and lost five laps, while its sister #91 car kept on leading the race. The first two cars pitted together halfway through the race, with Li and Xiaoxiang handing the wheel to Huang and Yao Yuanhao respectively.

With 20 minutes left on the clock, Yao spun and rejoined, but soon afterwards he made contact with the #26 KOE Racing CUPRA of Cai Zhangdai while they were fighting for P3; both cars spun and rejoined one lap behind the leaders.

The #91 Civic began the last quarter of the race with a 49-second lead over the #21 Golf, with the #77 Audi in third position, eight further seconds behind. During the last couple of minutes, Yang pushed to the limits in the attempt to chase the second-placed Weng Zhiyuan but ran wide in the chicane and had to settle for third behind the Golf.

Li and Huang took their maiden win in the championship, while #75 Civic Fk2 recovered from the early incident to finish a brilliant fourth.