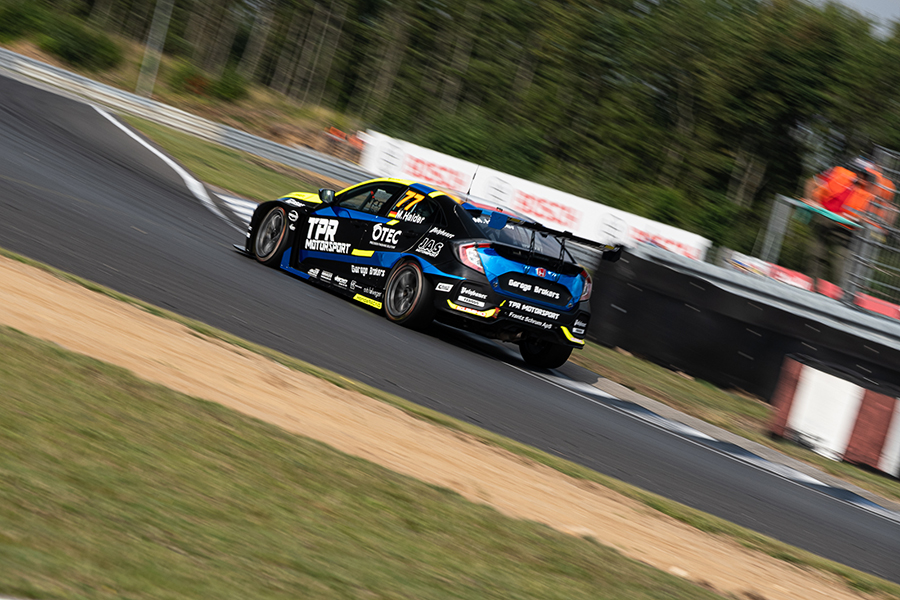 Mike Halder took another couple of wins in TCR Denmark at Jyllandsringen and closed the gap in the standings to five points only behind the reigning champion Kasper H. Jensen. Nicolai Sylvest won the second race and kept himself in contention, as he lies third, 23 points behind the leader.

Race 1 – Jensen was on pole with Halder alongside; the German nosed ahead as they negotiated T1, and Jensen was also passed by Sylvest for P2. In lap 1, Jensen hit Sylvest, pushing him wide, and retook second; Sylvest dropped to fifth behind Gustav Birch and Michael Markussen. In lap 2, Michael Carlsen and Steffen Larsen made contact and stopped on the track; the safety car was deployed, while Jensen was given a drive-through for hitting Sylvest, but the reigning champion retired with damage from the incident. When racing resumed in lap 6, Halder broke away from Birch and Markussen; this is how they finished, with Sylvest and Jacob Mathiassen in fourth and fifth.

Race 2 – Lars Højris and Allan Kristensen shared the front row of the reversed grid, but it was Philip Lindberg who led at the start from P3. Sylvest had a great get away from P7; he passed Kenn Bach and Højris, moving into second before stealing the lead from Lindberg in lap 2. Sylvest opened up a gap and Halder recovered from 10th on the grid to fourth, while Jensen climbed to 10th after starting from the pit lane. In lap 4, Halder overtook Bach for third and then Lindberg for second. Jensen gained another couple of places before dropping to eighth after serving a drive through for an incident with Markussen. Sylvest won by 4.6 seconds over Halder, with Lindberg third ahead of Jensen who passed Mathiassen for fifth in lap 12 and Bach for fourth in lap 14.

Race 3 – Halder and Sylvest topped the grid, with Jensen in P8. At the start, Halder led from Birch and Sylvest; in the opening lap, Jensen advanced to fourth and then muscled his way past Sylvest in lap 3. Three laps later, Jensen was handed P2 from his teammate Birch; he then tried to close the gap to Halder, but had to settle for second, 2.3 seconds behind. Birch completed the podium ahead of Sylvest.

The penultimate event will take place at Padborg Park on 9/10 September.