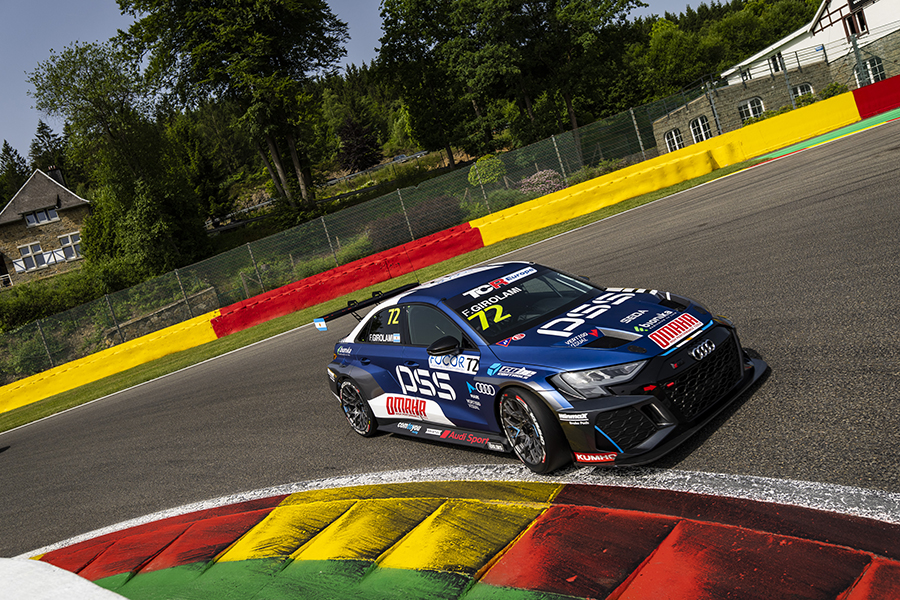 Comtoyou Racing’s Franco Girolami will start the first TCR ERurope race at Spa-Francorchamps from pole position in his Audi RS 3 LMS. It’s the first time this season that Girolami has qualified on pole and the result means the Argentinian driver has extended his lead in the Drivers’ championship. Alongside him on the grid will be the Volcano Motorsport CUPRA Leon Competición of Klim Gavrilov, while Jáchym Galáš has won the pole position for the reversed-grid Race 2 tomorrow in a Janík Motorsport Hyundai Elantra N.

After the field headed for the pits and a change to fresh tyres, Callejas went fastest with a lap of 2:30.938. The final two minutes were frantic, Jelmini set the quickest time (2:30.629) with Jack Young’s Halder Motorsport Honda Civic Type R in P2 (2:30.706) and Baldan improving to P3 (2:30.711). Mat’o Homola had his best lap deleted due to track limit infringements at Turn 17, but his second-best lap was enough to see him progress to Q2.

The ten-minute Q2 was even more hectic than usual. Again, it was Gavrilov who was the first to set a competitive time (2:30.441) ahead of Baldan (2:30.659), Jelmini (2:30.749), Files (2:30.854) and Young (2:30.874) before Girolami set the quickest time of the session to snatch pole position with a 2.30.110. Callejas then went P3 with a time of 2:30.630 and so the young Spaniard will start this afternoon’s Race 1 from the second row of the grid alongside Baldan. Having delayed his start to Q2, Coronel was ninth fastest in what ap-peared to be a tactical move and so will start Race 2 tomorrow on the front row of the re-versed grid, with the Hyundai Elantra N of Galáš on pole.

Race 1 is scheduled to start at 15:00 local time (CEST) and will be streamed live on TCR TV.