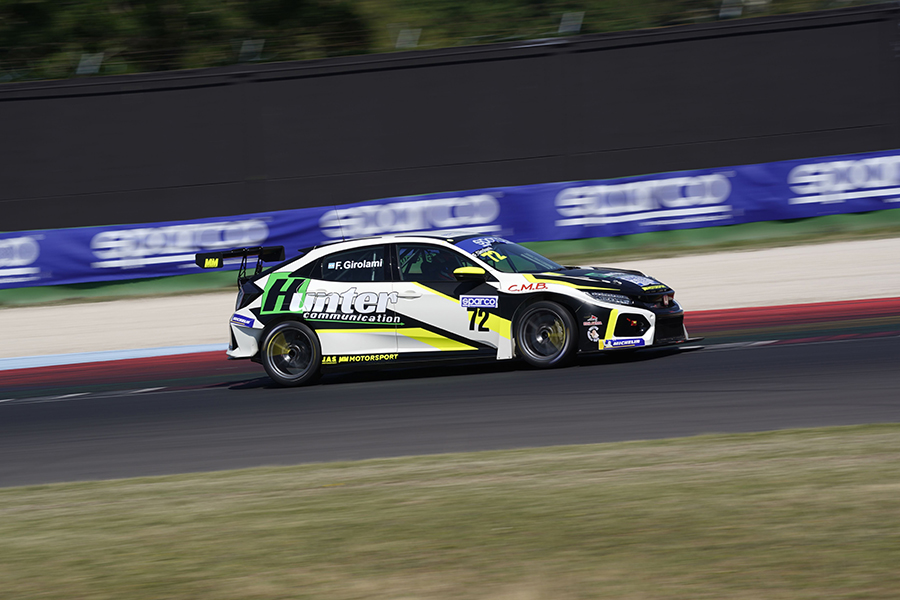 Imitating his brother Néstor who had been fastest in the WTCR Qualifying, guest star Franco Girolami drove his MM Motorsport Honda Civic Type R to set the pole position for the first TCR Italy’s race at Misano. The Argentine was in a league of his own and inflicted seven tenths of a second to Nicola Baldan who qualified his Target Competition Hyundai i30 N in second position. The former Italian champion was one tenth faster than his teammate Antti Buri, while Jack Young posted the fourth fastest lap ahead of Igor Stefanovski.
Reigning champion Salvatore Tavano who had won both races in the season opener at Monza qualified sixth and his runner up in last year’s championship and in the Monza races, Eric Brigliadori, was a disappointing 12th.
Baldan posted a first provisional fastest lap of 1:42.919 that was improved by Buri’s 1:42.884 and Kevin Ceccon’s 1:42.430, but Baldan retook the lead clocking 1:42.355 just before the red flag disrupted the session with 18 minutes left. Championship newcomer Sandro Pelatti crashed his BF Motorsport Audi at the Quercia bend and it took long time to repair the barriers, while the driver was hospitalised for medical checks.
When the session resumed Baldan immediately improved again to 1:42.194, but Tavano was the first to break the 1:42 mark with a lap of 1:41.917. However, Girolami 1:41.538 and Young 1:41.824 jumped into P1 and P2 respectively.
The last five minutes were thrilling. Girolami annihilated his competitors with a lap of 1:40.813 and despite their efforts none of the other drivers was able to complete a lap in less than 1:40. Some had their fastest lap disallowed for track limit infringements and this was the case for Tavano and Ceccon who could have made the top-five but eventually ranked sixth and ninth respectively.
Amongst those who managed to improve were Baldan, Buri and Stefanovski who advanced to P2, P3 and P5, while Young settled in P4.
Live streaming of both races at www.tcr-series.com; Race 1, Saturday at 13:44 and Race 2, Sunday at 09:40 local times (CEST).