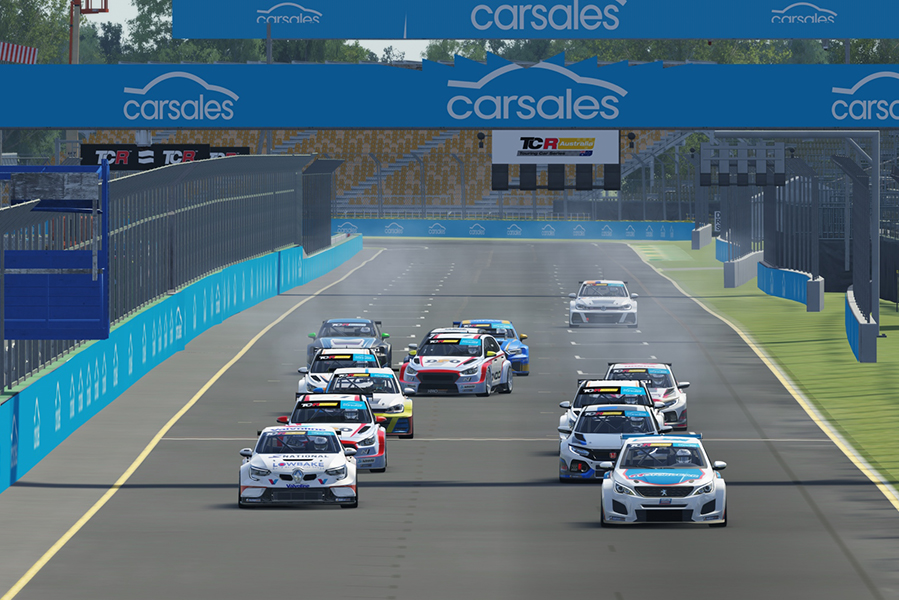 The digital Peugeot 308 and Renault Mégane RS shared race wins in the inaugural event of the TCR Australia SIM Racing series at the virtual track of Melbourne Albert Park.
Ben Bargwanna’s Peugeot of Burson Auto Parts Racing claimed a lights-to-flag win in Race 1, while Dylan O’Keeffe’s Renault won Race 2 for Garry Rogers Motorsport.
Bargwanna made good use of the pole position and took the lead at the start, while O’Keeffe – second on the grid – lost one place to John Martin’s Wall Racing Honda Civic during the opening lap. Moments later, O’Keeffe made a mistake and dropped to fourth behind the HMO Customer Racing Hyundai i30 N of Jaden Ransley. And so they finishe with Bargwanna the winner from Martin, Ransley and O’Keeffe.
2019 TCR Australia champion Will Brown sat on pole of the reversed grid for Race 2, but he hit the wrong key at the start and was sent back to the pits. This meant that Peter Vodanovich led the race from second at the start in the Racing Sims NZ Hyundai i30 N.
In lap 1, Zac Soutar (Team Soutar, Honda Civic) hit Chelsea Angelo (Astron Tech, VW Golf GTI) and sent her into a spin; two laps later Soutar made contact with Tony D’Alberto (Wall Racing, Honda Civic).
In the meantime, O’Keffee managed to overtake Liam McAdam (LM Motorsport, Audi RS 3 LMS) for P2 and began to close the gap from Vodanovich. Behind the two leaders there were some tough battles: while fighting for P3, Luke King (LK Racing, VW Golf GTI) hit Ransley and sent him wide, the Hyundai driver rejoined in fifth position behind McAdam. On the penultimate lap, Vodanovich made a mistake, handing the lead to O’Keeffe who crossed the line with a 1.2-second margin. King was classified third, followed by Ransley and Martin.
The next event will take place on July 2 at the virtual Mount Panorama circuit.