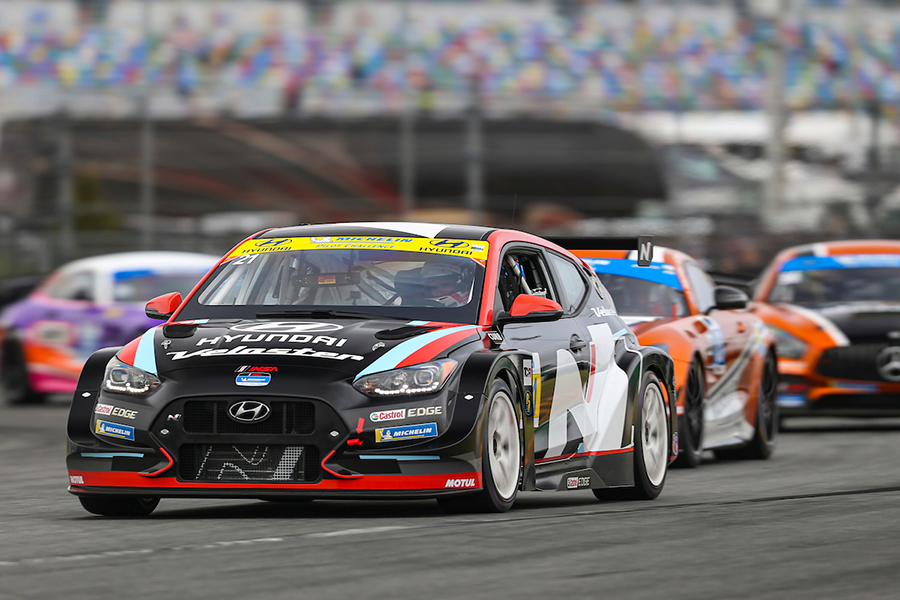 TCR rookie Gabby Chaves drove his Bryan Herta Autosport Hyundai Veloster N to post the fastest lap during the three-day test for the IMSA Michelin Pilot Challenge at Daytona International Speedway.
The 26-year-old Colombian, a former Indy Lights champion in 2014, clocked a 1:59.222 during the fifth of the six sessions; that was six tenths faster than the second best time of 1:59.846 set in the sixth session by Stephen Simpson’s JDC-Miller Motorsports Audi RS 3 LMS. The only other driver capable to complete a lap in less than two minutes was Alexandre Prémat who was timed at 1:59.938 in session 5. At the age of 37 and after a successful career in formula and sports cars, the Frenchman was impressive during his fist TCR appearance at the wheel of an Audi RS 3 LMS run by his own Team Prémat.
Fourth fastest was Rory Block from Argentina, in the Alfa Romeo Giulietta run by KMW Motorsport with TMR Engineering; he was followed by the Road Shagger Racing Audi of Jonathan Morley. Another TCR rookie, the reigning Formula Atlantic champion Dario Cangialosi, was sixth fastest in the Hyundai Veloster run by Forty7 Motorsports.
The fastest of the Honda drivers was Matthew Pombo in one of the three Civic Type R cars entered by LA Honda World Racing; Pombo set the 13th best lap of 2:00.737.
A total of 11 cars and 24 drivers took part in the test, in view of the series’ opening round, a 4-hour race that will take place at Daytona on January 24th.