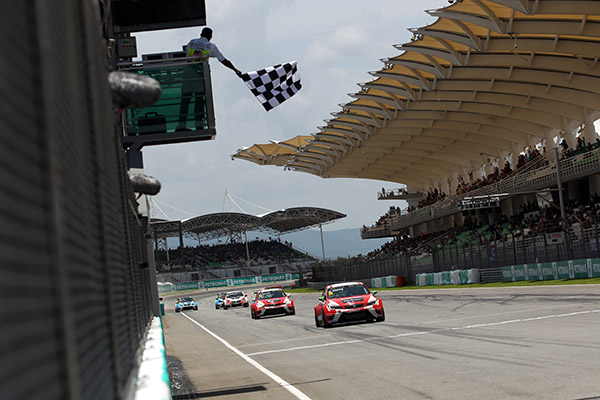 Gené resists to all attacks and wins thrilling Race 2

Jordi Gené returned to the first step of the podium in an international event after brilliantly controlling a lively and closely-fought Race 2 today in Sepang.
Despite the heat, the 44-year-old Spaniard kept his cool to make a perfect use of pole position and managed to keep the lead throughout the entire race, but had to resist to the furious attacks of other contenders, which included Ferenc Ficza, Jordi Oriola and Gianni Morbidelli.
Eventually, Team Craft-Bamboo LUKOIL posted a one-two, as Pepe Oriola took second, like yesterday in Race 1, and Gianni Morbidelli gave the Honda Civic car its first TCR podium finish. The Italian briefly lost the position to Andrea Belicchi in the last lap, but won it back with a superb overtaking in the very last corner that cost Belicchi one more position, as his team-mate and yesterday’s winner Stefano Comini took fourth. The Swiss leaves Sepang as the first point leader of the series.
The TCR International Series will resume for Rounds 3 and 4 at Shanghai International Circuit on April 11 and 12, in the frame of the Formula 1 China Grand Prix.

Key moments
Grid – The top-ten reversed grid for Race 2 had Gené on pole, with Ficza alongside him.
Start – Gené and Ficza pulled away nicely followed by Afanasyev and Oriola in an orderly start.
Lap 1 – Nykjaer and Veglia made contact and collected Afanasyev, sending him into the gravel.
Lap 2 – Veglia pitted for repairs and rejoined.
Lap 3 – Gené was closely followed by Ficza, Oriola and Morbidelli who were fighting for second; right behind Belicchi and Comini were chasing by Münnich.
Lap 3 – Grachev and Yu made contact and the Hong-Kong spun.
Lap 4 – Oriola and Morbidelli managed to pass Ficza; Munnich had a sudden slow-down and got passed by Comini and Belicchi.
Lap 5 – Ficza was passed also by the two Target cars.
Lap 6 – Skuz and Engstler retired, both claiming they lost power
Laps 6 to 9 – In a thrilling second part of the race, Gené, Oriola and Morbidelli were running bumper-to-bumper, while Belicchi and Comini were closing the gap.
Lap 10 – Belicchi overtook Morbidelli for third, but the Italian won it back in the very last corner.