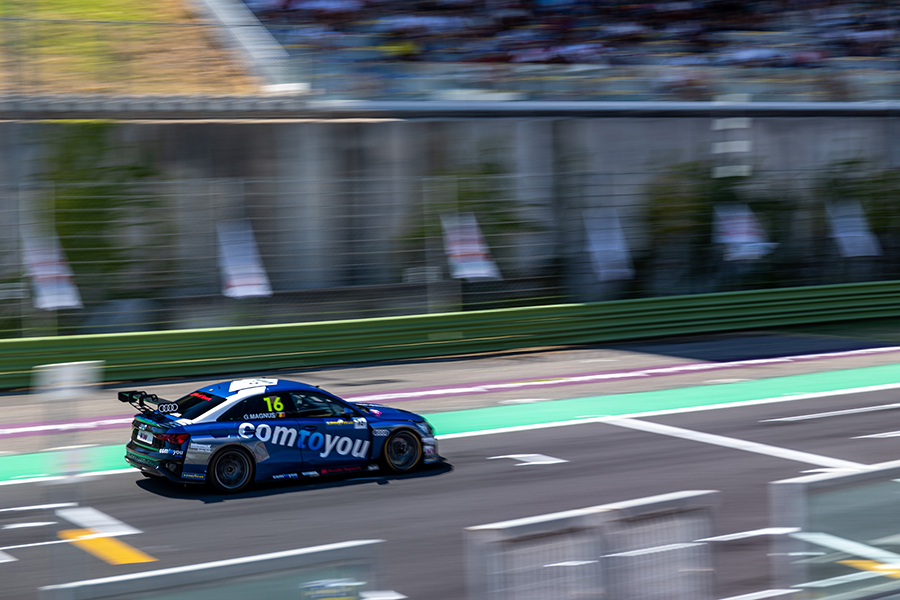 Gilles Magnus has taken his second win of the WTCR season in his Comtoyou Racing Audi RS 3 LMS, leading from the effective pole position to win ahead of teammate Nathanaël Berthon, while Mikel Azcona extended his championship lead after finishing third.

The two Cyan Racing Lynk & Co cars of Yann Ehrlacher and Santiago Urrutia were due to start from the front row, but as in Race 1, all five Lynk & Co cars withdrew from the race due to concerns with being able to make the race distance, leaving Magnus car as the best-placed driver on the grid ahead of his teammate Mehdi Bennani.

Bennani ran side-by-side with Magnus at the start, fighting for the lead before he made a mistake and fell behind the Engstler Motorsport Honda of Attila Tassi and Berthon’s Audi.

Azcona was making quick progress and was let through by his Hyundai teammate Norbert Michelisz for fifth on lap two. The two Münnich Motorsport Honda cars were also working together, with Race 1 winner Néstor Girolami allowing teammate Esteban Guerrieri through in order to attack the Hyundai cars ahead.

On lap eight, just as in Race 1, Bennani and Tassi both experienced punctures and came into the pit lane, promoting Berthon and Azcona to second and third in the race.

With Guerrieri unable to pass Michelisz, the Honda driver was asked to drop back behind Girolami to defend him against Rob Huff’s CUPRA, but on the penultimate lap the Argentine was forced to pit after he also suffered a tyre issue.

Magnus won the race by 1.4 seconds over Berthon, with Azcona third, while there was over ten second back to the rest of the pack which had backed off considerably in order to protect the tyres.

Azcona’s podium sees the Spaniard extend his points lead, and he’s now on 200 points, 36 clear of Girolami, with Huff third, 52 points back.

The next event will be at the Anneau di Rhin in France on August 6/7.