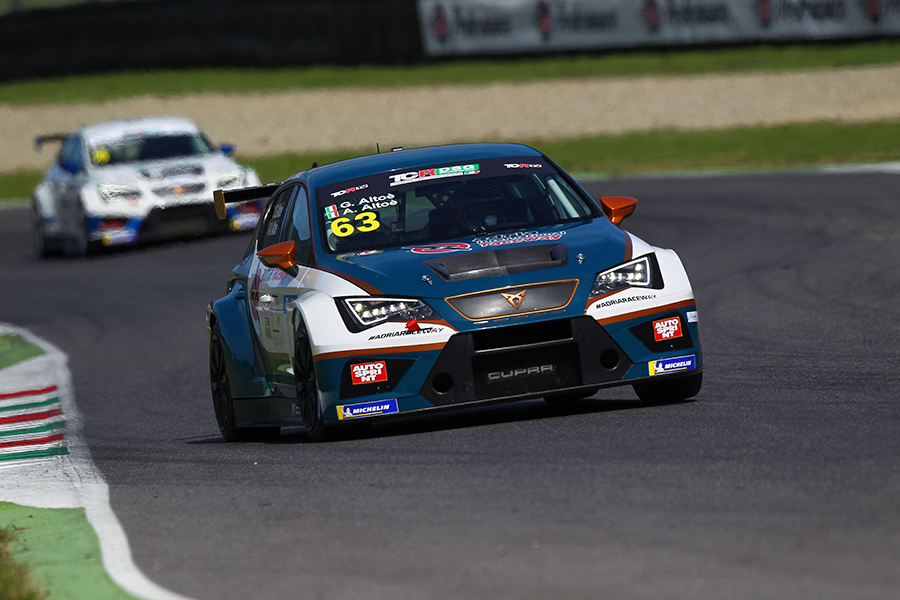 The pairing of Giovanni and Alessandro Altoè – uncle and nephew – secured the inaugural TCR DSG Endurance as they finished in seventh position at the end of a chaotic final race at Mugello. Their rivals in the title fight, Giacomo Barri and Ermanno Dionisio were classified sixth and were only able to recover two points of the 14-point gap they had from the leaders.
The race victory went to Romy Dall’Antonia and Samuele Piccin in the BF Motorsport CUPRA on their second appearance in the series, while Marco Pellegrini and Simone Vullo finished a close second and Eric Scalvini and Raffaele Gurrieri completed the podium.
The race results were significantly influenced by the long safety car periods. The first forty minutes were neutralized because of thick fog, then the safety car was deployed again twice following race incidents. This affected the strategies of the teams that tried to make the most out of the situation and pitted during the safety car interventions.
Cosimo Barberini sat on pole after he won the Saturday’s Qualifying race with title contender Barri alongside him. The leader of the standings, Giovanni Altoè, was at the back of the field because he had gone off the track during first lap of the Qualifying race with a broken suspension.
Most of the teams pitted twice while the safety car was leading the field after the start. Actual racing began after 40 minutes with Lorenzo Marcucci in the lead. However, after a few minutes Edoardo Necchi spun and the safety car was deployed again for ten minutes. When action resumed, Barri overtook Giovanni Altoè for P8.
The safety car was prompted again after Riccardo Ruberti’s CUPRA went off and remained stranded onto the gravel. The green flag was waved with 43 minutes left. Roberto Olivo led the field while Barri and Altoè moved up into second and third, nearly a full lap behind the leader. Alessandro Altoé continued following Barri until the 29th lap, when he lost third place to Romy Dall’Antonia.
Olivo pitted for refuelling and handing the car to Mariano Costamagna with 30 minutes to go and so Barri inherited the lead, but three minutes later he pitted with a flat front tyre, Altoè followed him to change the front tyres. Dall’Antonia was the new leader ahead of Marco Pellegrini and Giulio Bensi; Altoè and Barri were placed eighth and ninth.
In the final part of the race, Eric Scalvini passed Bensi for P3 and completed the podium behind the winner Dall’Antonia and Pellegrini. Barri overtook Alessandro Altoè for P6, but this could not prevent his rival from clinching the title.