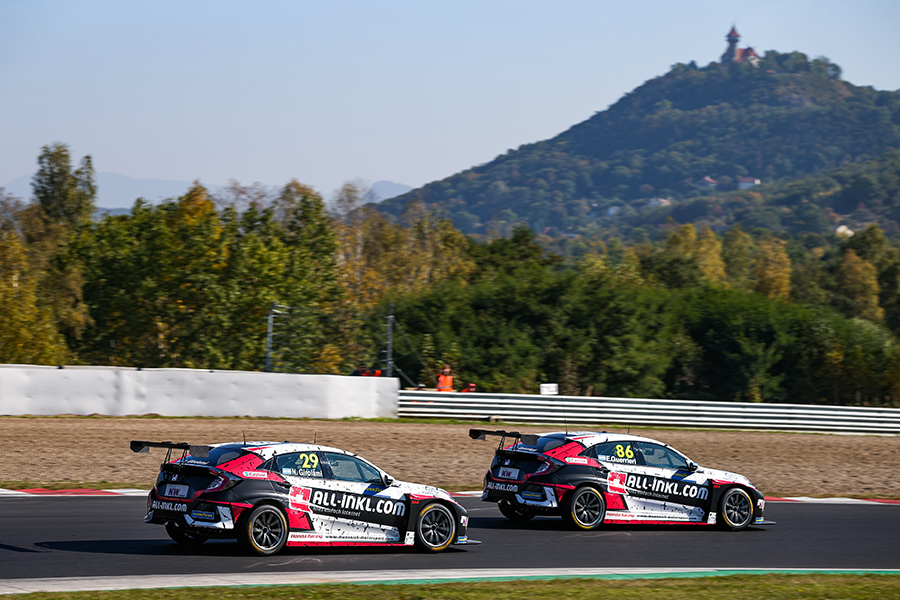 Néstor Girolami is the ninth different winner from nine races in the 2021 WTCR season, after leading a Münnich Motorsport Honda 1-2 in the first race of the day at Most. Girolami led his fellow Argentine teammate Esteban Guerrieri, with both drivers now drawing themselves back in contention for the drivers’ title.
Ahead of the race, Guerrieri had been handed a two-place grid penalty for the first race after he’d been deemed guilty of holding up Tom Coronel in qualifying, and so started the first race from ninth on the grid.
Local guest driver Petr Fulín started from pole position in his Fullinrace Academy CUPRA Leon Competición, but the Czech driver had a slow getaway due a clutch issue which gave Girolami an easy run from the outside of the front row and into the lead.
Into Turn 1, Fulín and Yvan Muller came together; Fulín spun and was collected by the Audi of Nathanaël Berthon, with both drivers out on the spot and the safety car deployed.
In the resulting melee, Guerrieri found himself in second position, followed by a phalanx of three Lynk & Co cars, with Yann Ehrlacher leading Thed Björk and Muller.
At the restart, Münnich Motorsport deployed team orders, confirming Guerrieri would not attempt to pass Girolami, while Cyan Racing similarly had Muller swap positions with Björk for fourth, and then told the drivers to hold positions.
Ehrlacher was battling Guerrieri for second throughout the race, but couldn’t find a way past, with Girolami going on to claim his first win since Zolder last year ahead of  Guerrieri and Ehrlacher.
Ehrlacher extended his championship lead to 18 points over teammate Santiago Urrutia, who finished down in 12th, with Jean-Karl Vernay tied for third with Esteban Guerrieri, 23 points back.
Race 2 is scheduled to take place at 17:10 CEST, with Mikel Azcona’s CUPRA starting from pole position ahead of the Hyundai of Norbert Michelisz.