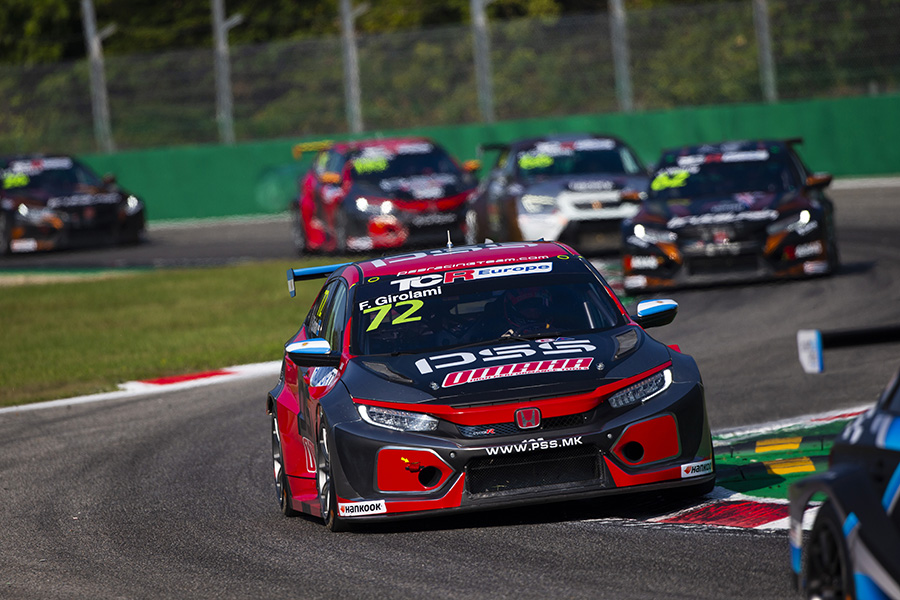 The PSS Racing Honda Civic Type R of Franco Girolami will start TCR Europe’s Race 1 at Monza from pole position after the Argentine setting the quickest time in Qualifying. Just one-hundredth of a second separated Girolami from Jack Young in a Brutal Fish Racing Honda, with Felice Jelmini qualifying third in the best of the Sébastien Loeb Racing Hyundai Elantra cars.
In the first stage of the two-part session, the SLR Hyundai cars were first to show their hands, with Sami Taoufik (2:00.130), Niels Langeveld (2:01.973) and Jelmini (2:02.101) making up three of the top four after the first competitive times were recorded, with Tom Coronel second fastest (2:01.582) thanks to receiving a tow from the Korean cars. On the next lap, Jelmini, Coronel, Langeveld and Mehdi Benanni all improved their times, but it was Mikel Azcona who was at the top of the timesheet with 1:58.737, ahead of Coronel (1:59.112) and Janík Motorsport teammates Jáchym Galáš (1:59.224) and Mat’o Homola (1:59.258).
Lap times dropped steadily throughout the remainder of the twenty-minute Q1, with Nicolas Baert (1:58.842), Jimmy Clairet (1:58.780) and Galáš (1:58.670) all taking turns to set the second-quickest time behind Azcona. The balance then shifted in favour of the Honda cars, with Girolami going fastest with 1:57.853 ahead of Young on 1:58.038. Azcona improved to 1:58.272 before being pipped by Jimmy Clairet’s 1:58.194. Young then went P1 (1:57.548) while Girolami improved his best lap time (1:57.553) but remained in P2. After a flurry of pit stops, Coronel improved on successive laps to end Q1 with the third-fastest time of 1:57.861, just ahead of Azcona on 1:58.026. With seventeen seconds left on the clock, the session was red-flagged after Rubén Fernández parked his CUPRA in the gravel at Turn 9 and had to be recovered. The twelve drivers who went through to Q2, therefore, were Young, Girolami, Coronel, Azcona, Jimmy Clairet, Isidro Callejas, Homola, TCR Europe newcomer Bartosz Groszek, Galáš, Jelmini – the only Sébastien Loeb Racing Team driver to do so – Baert and Dušan Borković.
The ten-minute Q2 then saw a frantic scrap to set lap times, with Young (1:57.361), Jelmini (1:57.693) and Girolami (1:57.763) all made their intentions clear, while Azcona was the last driver to leave the pit lane. Girolami improved on his next lap, which delivered the pole-setting time of 1:57.073 while Young and Jelmini also improved with times of 1:57.083 and 1:57.333 respectively. Azcona ended the session having set the seventh-fastest time of 1:57.947 and so appeared to be targeting a strong Race 2 performance, in which he will start from the second row of the grid. Thanks to the reversed-grid format, it will be the Comtoyou Audi RS 3 LMS of Baert that will start Race 2 from pole position with Homola’s Hyundai i30 N sharing the front row.
The result means Girolami takes the maximum ten Qualifying points and so has narrowed the gap to Azcona in the Drivers’ Championship to 31 points.
The first race will be streamed live today at www.tcr-series.com; 13:05 local time (CEST).