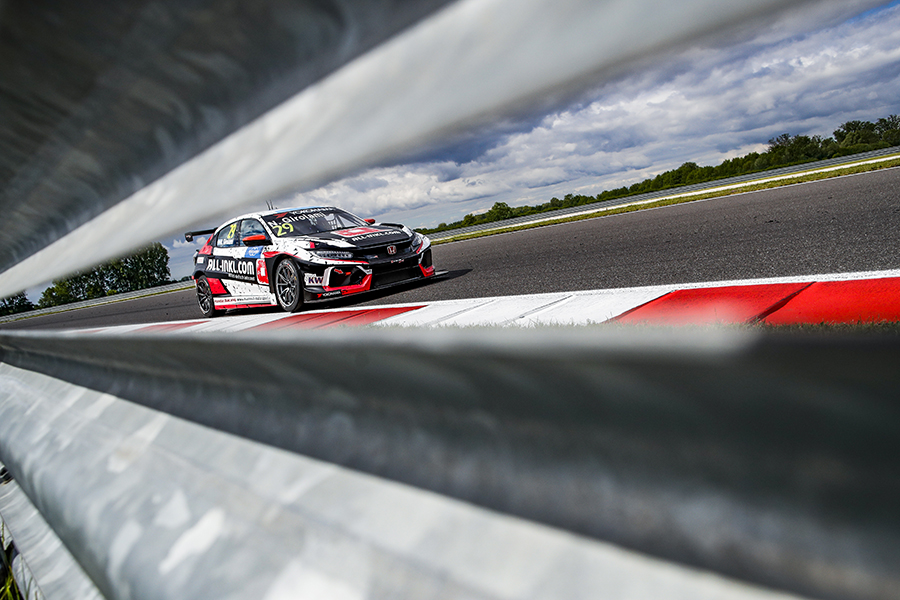 Girolami-Guerrieri make a Honda 1-2 in Race 2

The Argentine duo of Néstor Girolami and Esteban Guerrieri claimed a 1-2 finish for Honda and Münnich Motorsport in the second WTCR race at the Slovakiaring. As Gabriele Tarquini and Thed Björk did not score, this also meant that the two Argentines increased their gaps on top of the standings. Girolami now leads by 13 points over Guerrieri, while Tarquini lies a further 21 points behind.
Kevin Ceccon completed the podium in third position and gave Team Mulsanne and the Alfa Romeo Giulietta their second podium result after Ma Qing Hua’s second place in Race 1.
Rob Huff, who sat on pole of the top-six reverse grid led the field into T1, followed by Girolami and Guerrieri who made a great start from the sixth spot; Ceccon followed in fourth place ahead of Niels Langeveld, Tom Coronel and Daniel Haglöf.
Girolami took the lead from Huff on lap 2, as the leading quartet began to pull away. Behind them there was a close fight for the fifth position between Catsburg, Aurélien Panis, Langeveld, Tarquini, Mikel Azcona and Ma.
On lap 3, Guerrieri overtook Huff for second and in the following lap Panis and Tarquni came together, which resulted in a drive-through for the Italian.
On lap 7, Ceccon overtook Huff for third and the Briton lost fourth position to Catsburg as well. In the final laps, Ceccon closed in on the leading duo, but it was too late to try an overtaking manoeuvre and so Girolami scored his third victory of the season from Guerrieri and Ceccon.
Race 2 will start at 16:45 with the same front row as Race 1: Catsburg on pole and Norbert Michelisz alongside him.