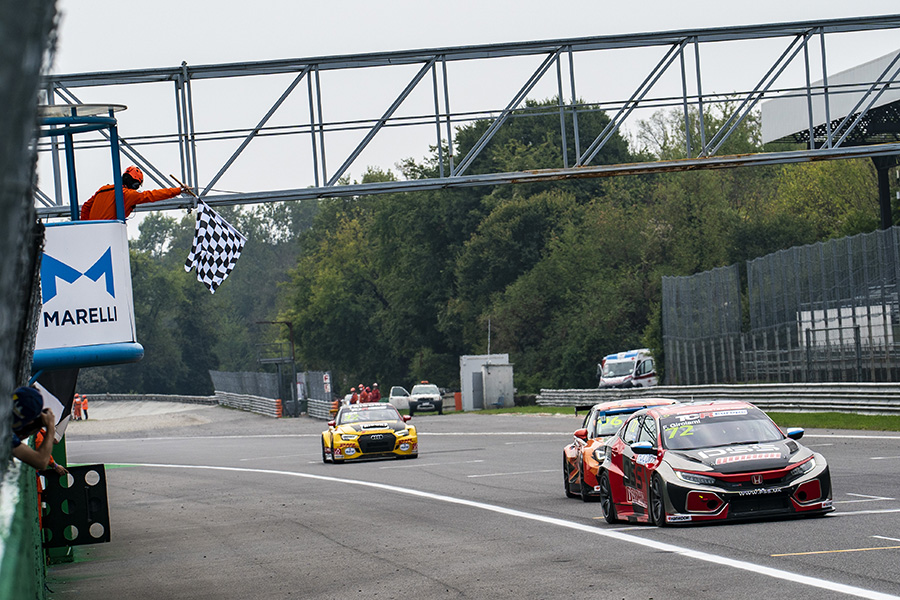 After one of the most exciting final laps of the entire season, Franco Girolami was able to keep ahead of a hard-charging Mikel Azcona to score his second win of the season by a little over two-tenths of a second. Race 1 at Monza was packed full of drama and incidents and the result means the battle for the Drivers’ title is now effectively a straight fight between Azcona and Girolami with three races remaining.
At the start, pole-sitter Girolami made a great start and headed the field into the first chicane, but Jack Young made a poorer start from P2 on the grid and was passed by Felice Jelmini, who’d started from P3. After the customary squeeze through the chicane, Dušan Borković passed his teammate Tom Coronel for fourth position while there was contact between the other Comtoyou Audi of Nicolas Baert and the Brutal Fish Racing Honda of Martin Ryba that saw the Civic spun across the track and making contact with the barrier. Later, on the opening lap, Young ran across the kerbs at the Ascari chicane and dropped from P3 down the order. Azcona, who’d started seventh, passed Coronel to end the lap in fourth place behind Borković.
On Lap 2, Azcona outbraked himself at the Roggia chicane and had to take to the escape road, emerging back onto the track in a four-way fight for P3 with Borković, Coronel and Jimmy Clairet. Ryba and Young, meanwhile, were both in the pits after their dramas on Lap 1. Borković locked his brakes going into Turn 1 on the third lap, allowing Coronel to dive up the inside to take third place. Jimmy Clairet briefly overtook Azcona for P5, only for the CUPRA to pass the Peugeot a few corners later. Azcona moved up another place on the next lap when he passed Borković, while there was contact in the first chicane between Jáchym Galáš and Isidro Callejas that saw the young Spaniard pull up at the exit to Turn 2, bringing out yellow flags which would remain in place until the end of the race. Galáš later received a five-place grid penalty for tomorrow’s Race 2 for his part in the incident.
While Brutal Fish Racing had now lost all three of the team’s cars, Team Clairet Sport was suffering mixed fortunes; Teddy Clairet pulled into the pits on Lap 5 while his brother Jimmy was attacking Borković for P5, with Mat’o Homola and Sami Taoufik running right behind Clairet’s Peugeot. Azcona’s driving, meanwhile, attracted a warning flag for track limit infringements.
On Lap 6, Taoufik dived up the inside of Homola to snatch P7 while further up the order, Coronel was now defending third place from a determined Azcona, but the inevitable happened on the next lap when the CUPRA passed the Audi to move into the podium places. Borković, meanwhile, had dropped a number of positions which allowed Clairet, Taoufik and Homola to move into fifth, sixth and seventh respectively. Taoufik was forced to take a big shortcut across the grass after locking up at the Turn 1 chicane at the start of Lap 8 but immediately gave the position back. On the same lap, Jelmini slowed and eventually pulled up with a front-left puncture, which allowed Azcona to move into second place and start to hunt down Girolami, the race leader.
That set the scene for an enthralling final few laps, in which Azcona closed right up on his nearest rival for the TCR Europe title. Further back, Taoufik passed Clairet for P4, only for the Peugeot driver to fight back – the pair running side by side through the Lesmo corners. Girolami then ran wide through Ascari, allowing Azcona to move to within striking distance. The final lap then escalated the drama still further, with Azcona seemingly about to pass around the outside of the Parabolica, only for Girolami to hold his nerve. At the chequered flag, Girolami took a lights-to-flag win that was anything but straightforward, with Azcona finishing second and Coronel nearly eight-tenths behind the pair in third place.
The result means Girolami has edged slightly closer to Azcona in the Drivers’ series. The Honda driver is now 26 points behind, with Langeveld a further 90 points adrift. Tom Coronel’s podium finish means he moves up into fourth in the standings ahead of Mehdi Bennani, who failed to score after picking up a puncture.
The second race will start tomorrow at 13:30 (CEST), with Nicola Baert’s Audi RS 3 LMS and Mat’o Homola’s Hyundai i30 N sharing the front row on the reversed grid. Live streaming live today at www.tcr-series.com.