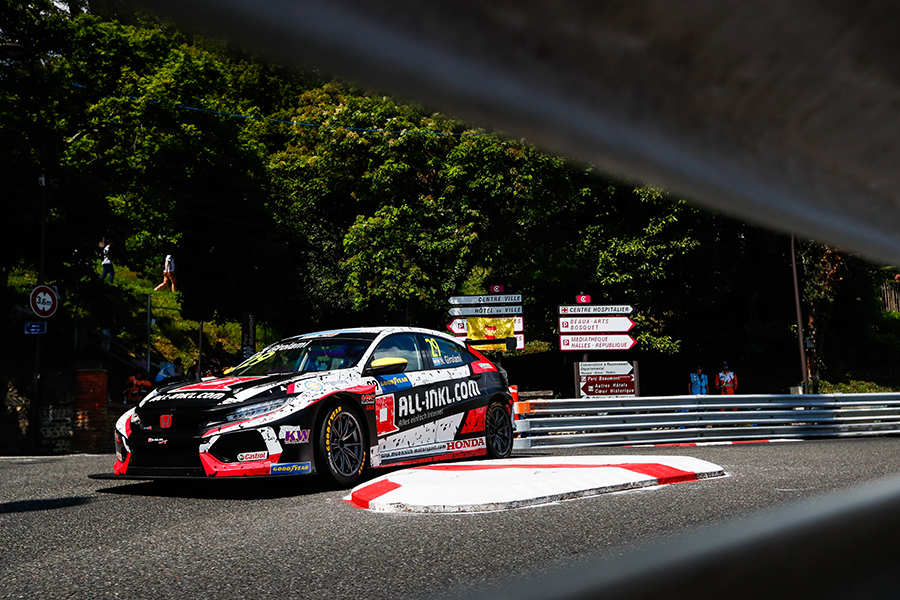 Néstor Girolami has claimed his first pole position since the Nürburgring last year, leading an all-Honda front row ahead of teammate Esteban Guerrieri in a session which was held up for one hour due to a heavy crash for Thed Björk in Q2.

It was the BRC Hyundai Elantra of Mikel Azcona who led the way in the first part of qualifying, just pipping Girolami by nine thousandths. The final driver to make the top twelve cut-off was Santiago Urrutia, with Rob Huff just missing the cut.

At the start of Q2, the Cyan Racing entries headed out first, with Yvan Muller and Yann Ehrlacher both putting down competitive benchmark times on their first flying laps, while behind them, teammate Björk hit the inside wall at Turn 12 and slammed into the barrier on the exit and was narrowly missed by teammates Santiago Urrutia and Ma Qing Hua. The session was red-flagged, as Björk’s car required recovery, with substantial damage to its front left quarter, while the barriers also needed attention.

The session resumed after a one-hour delay, but almost straight away there was trouble, as the second Hyundai of Norbert Michelisz hit the wall at Turn 4, and left debris on track. He pitted for repairs, while the debris was picked up under a Full Course Yellow.

The two Münnich Honda cars then took over at the front of the field, with Guerrieri leading Girolami, before the two were split by a last-minute improvement by Nathanael Berthon’s Audi.

Muller and Ma were the only two Cyan Racing drivers to make the top-five shootout, with reigning champion Ehrlacher just missing out - while the battle-scarred Hyundai of Michelisz managed to get around the track to set the tenth fastest time, in doing so claiming pole position for the reversed grid second race.

In the top-five shootout, Guerrieri set a great first lap of 1:19.937, that was bettered by his team-mate Girolami, whose 1:19.783 was enough to secure him pole position. Muller claimed third on the grid ahead of Berthon, with Ma completing the top five on his WTCR return.