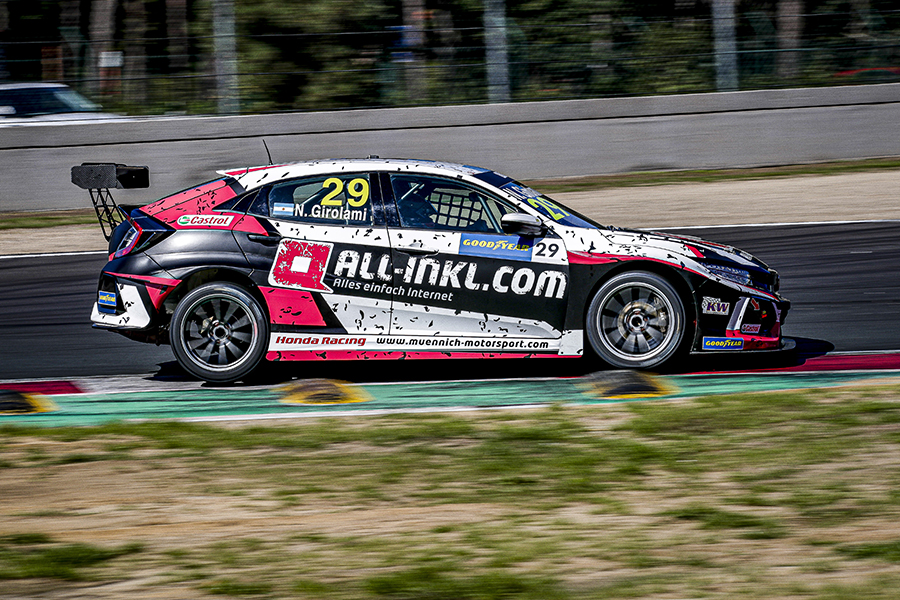 Girolami opens with a light-to-flag win at Zolder

Néstor Girolami began the 2020 WTCR season with a lights-to-flag victory at Zolder. The Argentine and his Honda Civic started from the pole position on the reversed grid and led for the whole race. Thed Björk, Attila Tassi and Tom Coronel never stopped chasing him, but couldn’t get close enough to threaten him. Jean-Karl Vernay finished fifth on his first appearance in the Alfa Romeo Giulietta Veloce, showing he had the pace to stay with the leaders, but his and the team’s hopes of a better result were spoiled by a poor start.
Eventually it was a sweet-and-sour race for Honda, because the first and third places scored by Girolami and Tassi were counterbalanced by the retirements of the other two Civic cars of Esteban Guerrieri and Tiago Monteiro. The best of the Hyundai drivers was Norbert Michelisz in 11th position, while Australian guest start Dylan O’Keeffe finished 13th in his Renault Mégane and Mikel Azcona was 16th in the best of the CUPRA cars.
Girolami sprinted well from the pole, while Vernay made a slow start and dropped from second to fourth behind Björk and Tassi. The Frenchman lost one more place to Coronel during the first lap.
Behind him Santiago Urrutia, Yann Ehrlacher, Guerrieri and Yvan Muller were putting the pressure, but on lap 3, Guerrieri stopped on the track in a cloud of smoke. The same happened to Monteiro five laps later.
In the last part of the race, Vernay shook his pursuers off and began to close the gap to the leading quartet, but time was ticking out and he had to settle in fifth position behind Girolami, Björk, Tassi and Coronel.
Race 2 will start at 14:15 with Nathanaël Berthon’s Audi and Yann Ehrlacher’s Lynk & Co filling the front row.