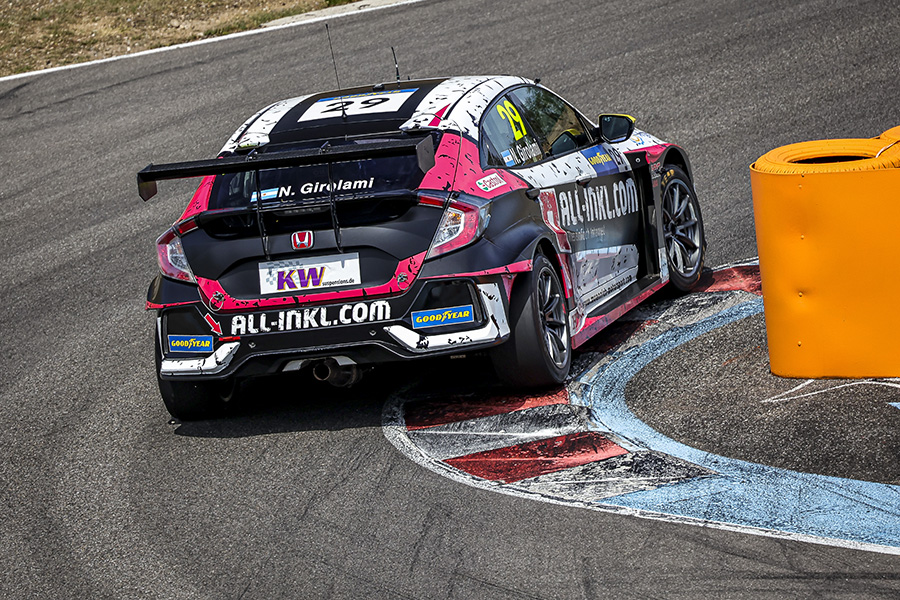 Münnich Motorsport driver Néstor Girolami has claimed a shock pole position for WTCR’s Race 1 at the Anneau du Rhin, outperforming Nathanaeel Berthon with a great lap in the Q3 shootout. Girolami’s pole position is his third of the season in his Honda Civic Type R and helped him close up in the standings.

Following the withdrawal of Cyan Racing and its five Lynk & Co 03 cars, just 12 drivers took part in qualifying, with all of the automatically rewarded with a slot in Q2, as long as they were able to set a timed lap in Q1.

While Berthon set the best time in Q1 in his Comtoyou Racing Audi RS 3 LMS, it was Girolami who led Q2, setting a very quick time of 1:26.866 on his first run, just 0.034 seconds ahead of his teammate Esteban Guerrieri. Championship leader Mikel Azcona found himself outside of the top ten near the end of Q2, but with a last-minute flyer, he was able to haul his BRC Squadra Corse Hyundai Elantra N into the top three, setting the same time as Guerrieri. Comtoyou Racing’s Mehdi Bennani found himself at the bottom of the top ten at the end of Q2, and therefore won pole position for Race 2 with the partially reversed grid, where he will start ahead of the Zengő Motorsport CUPRA Leon of Rob Huff.

In the top five shootout, Berthon set an impressive time of 1:26.572, overshadowing the benchmark set by his teammate Gilles Magnus (1:26.942). Azcona came close with a lap of 1:26.618, but while it looked like Berthon and Azcona had secured the front row, a fast time, and a stunning final sector from Girolami saw the Argentine go just 0.026 seconds faster than Berthon to deprive the Frenchman of pole.

Crucially, this also meant Girolami closed up in the championship standings with the points for the fastest lap in the session, and is now just 32 points behind Azcona heading into tomorrow’s races.

Race 1 is scheduled to get underway tomorrow at 11:15 local time (CEST).