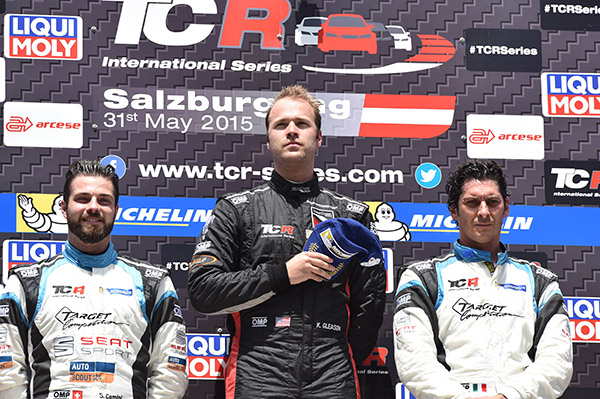 Keeping up with its long-standing touring car racing tradition, the beautiful track of Salzburgring produced two close and interesting races. Kevin Gleason took a well-deserved maiden win in the TCR in Race 1, becoming the eighth different race winner in the series (in only 12 rounds) and the first US driver to win an international touring car race. He also gave the Honda Civic his fourth success of the season.
In Race 2, Michel Nykjær became the third driver to clinch more than win: the Dane kept the lead in from lights to flag, just as Gleason did in Race 1, confirming his incredible personal record on this track. Nykjær has won every time he has raced on the Salzburgring, regardless of the series he was competing in, and earned the status of “Salzburgring Meister”.
The SEAT and Honda cars evenly shared podium finishes today, with the other Target drivers, Stefano Comini and Andrea Belicchi, coming home second and third in Race-1 and Pepe Oriola and Gianni Morbidelli clinching the rostrum in Race-2.
With the top title bidders having all mixed fortunes, the situation in the overall standings looks pretty close, with six drivers within 48 points. Morbidelli keeps the provisional lead by 18 points on Comini and 22 on Oriola.
The TCR International Series will resume on June 21st at Sochi, Russia, for Round 13 and 14.