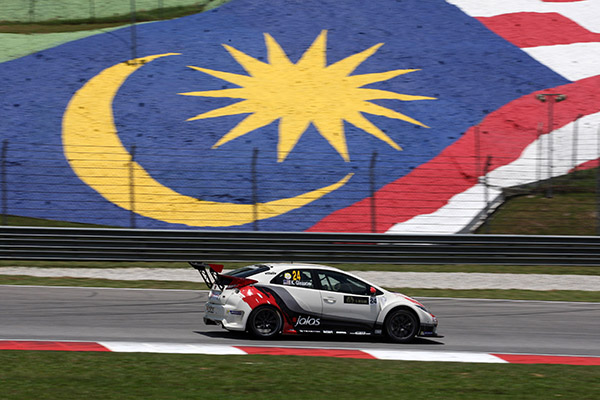 It was a hot first-ever qualifying session for the TCR contenders at Sepang, as under suffocating heat, the fierce battle for pole showed the top 12 within one second or less in both Q1 and Q2. Kevin Gleason, at the wheel of the West Coast Racing Honda car, made history as he took the pole position ahead of TCR’s first-ever race, thus becoming the first pole-sitter of the series.
The US driver impressed all observers with his impeccable and aggressive style, preceding the two Target Competion SEAT León cars of Andrea Belicchi and Stefano Comini and the Liqui Moly Audi TT car of Franz Engstler, with no less than three different brands represented in the top-four.
Jordi Gené qualified tenth in the Craf-Bamboo Lukoil SEAT, meaning that he will be on pole on the top-ten reversed grid for tomorrow’s Race 2

An elated Gleason commented: “I feel wonderful! It’s amazing, the car is brand new, but the team did a great job and they have worked so hard together with JAS in order to get everything ready and running. I had no expectations before the qualifying. Just wanted to do the best I could. I struggled with understeer in Q1, but we managed to make some adjustments in the five-minute break and it worked. After that the car felt great!”

Qualifying 1: Top-twelve within a second
All cars took the track for the qualifying session, with sunshine and heat hitting heavily. Ferenc Ficza was an early leader, having posted a time of 2.21.208 in his second flying lap, preceding Pepe Oriola and Andrea Belicchi. The session was red-flagged less than 9 minutes to the end as the engine of the Campos Racing Opel of Jordi Oriola stalled, leaving the car stranded in the middle of a corner. Frank Yu spun almost at the same time. By then, the Proteam Racing Ford Focus of Diego Romanini had stopped by the reappearance of a gearbox problem, not having completed a full flying lap.
The battle was superb as the session resumed, with Stefano Comini, Gianni Morbidelli and Andrea Belicchi successively posting fastest laps. Eventually, Belicchi (Target Competition SEAT) kept the advantage (1.20.778), with the top-twelve drivers making it to Q2 within a second. Ficza was second fastest ahead of Gianni Morbidelli, Sergey Afanasyev and Jordi Gené.

Qualifying 2: Three different brands on first two rows
The Audi cars of Engstler and Grachev started Q2 ahead of the pack. Comini (2.19.878) was able to beat Engstler for the provisional pole by  mid-session, but surprise came from Kevin Gleason who put in a perfect lap (1.19.717) and gave pole position to the Honda Civic car of West Coast Racing with the top-eleven all covered by 8 tenths of a second. Belicchi secured a spot on the front row, ahead of Comini, Engstler, Münnich and Morbidelli. The unlucky guy of Q2 was Michel Nykjaer, hit by fuel feeding problems that prevented him to complete a single flying lap.