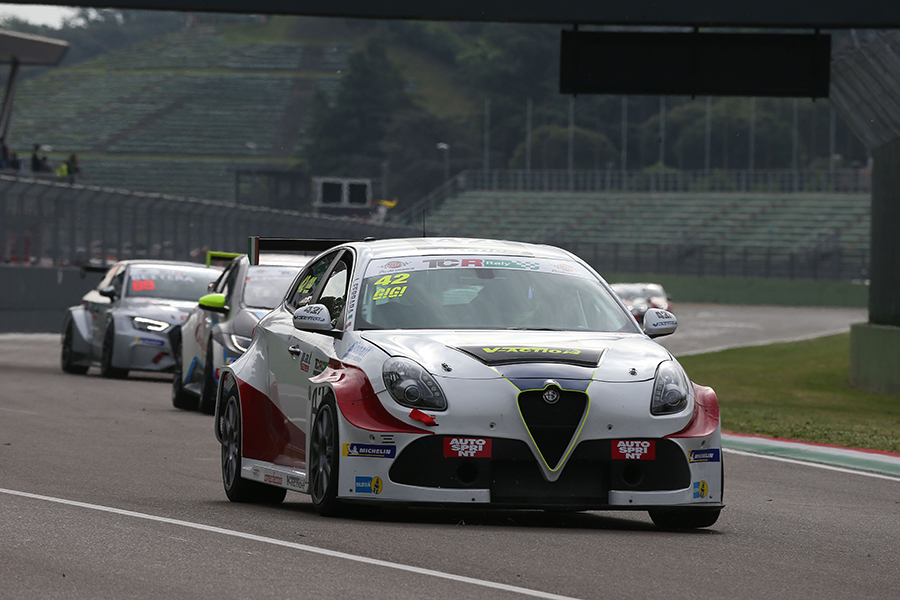 Glory for Ferrara and Alfa Romeo at Imola

Luigi Ferrara was the first race winner of the 2018 TCR Italy, giving an unexpected but well-deserved maiden win to the Alfa Romeo Giulietta of V-Action Racing Team in an incident-packed Race 1 at Imola, which only yielded a few race laps because of two safety-car periods. Salvatore Tavano (Cupra) took a brilliant second in his return to racing, beating the Pit Lane Competizioni Audi of Enrico Bettera, in a breath-taking final sprint.
The start offered some drama, as Nicola Baldan stalled from the front row; pole sitter Eric Scalvini took the lead ahead of Ferrara, Marco Pellegrini (Target Competition Honda), Bettera and Plamen Kralev (Kraf Racing Audi). During the first lap there was a contact between Peter Gross and the Walter Margelli; they both hit the barriers, prompting the safety-car. The first lap was also fatal for the Honda of Davide Nardilli, who retired with a broken driveshaft.
At the restart, with 12 minutes of race left, Ferrara began pressing on Scalvini, while Kralev, Bettera and Pellegrini fought for third, but the race was again disrupted by the safety-car when Pellegrini crashed at the Variante Alta; seconds later Alessandro Thellung and Gabriele Volpato collided in the same spot while the leader Scalvini retired with throttle problems.
Ferrara inherited the lead for the final lap, which saw tough fights for the positions: Massimiliano Gagliano and Francesco Savoia collided, while Bettera punted Kralev off at Rivazza 1. Tavano won a photo-finish sprint with Bettera for second. Federico Paolino crossed the line in fourth, but was dropped to 16th for overtaking under yellow, leaving the positions to José Rodrigues and Andrea Larini. Giovanni Altoè won the DSG class, taking eighth overall.
The second race will start at 16:00; live streaming at www.tcr-series.com and www.tcr-series.tv.